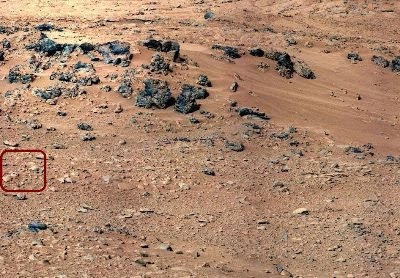 In the sequence of images, the "being" ... located after an intense ocular effort. PHOTO: NASA/JPL-Caltech/MSSS. [http://www.nasa.gov/mission_pages/msl/multimedia/pia16204.html]

Click on the lens or on the link below to view the enlarged photo and the thing marked: 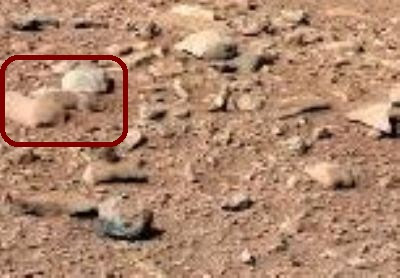 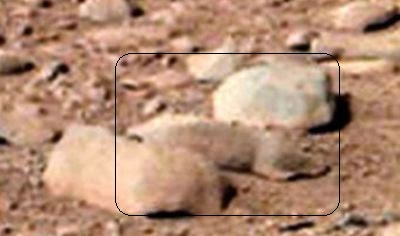 MARS. The photo is on the NASA site. It was obtained by the camera mast (Mastcam) during the Martian day 52 or 52th of sun of the mission Curiosity Mars Rover, or be in 28/09/2012. This place of the red planet is called Rocknest. The real dimension of the frame is 1.5 m wide by 5 m high.

At first glance, does not exist, in this landscape, nothing remarkable, much less a way of life. But once again, the eagle eye of an internaut that certainly would want so much to find something extraordinary in this orb apparently dead, discovered or at least can seem that discovered a living being amid the rocks. Whatever, its shape and appearance is similar to a Guinea pig.

Find this creature in the environment is extremely difficult. It requires a huge degree of magnification of the photo and manipulation of the picture in terms of focus and definition to give some clarity to the picture.

But, discarding the hypothesis of an optical illusion, pareidolia phenomenon, one can concede that, finally, there is the possibility that the "object" is even an animal, with eye, coat and paws.

* At the website of origin of this news thus like in the page of the NASA is almost impossible to find the "animal". BMW, had to squeeze the eyes to offer to its readers the exact location of the ... creature? ... Object? ... Enfin ... of the thing.

THIS NEWS IN PORTUGUESE
[http://sofadasala-noticias.blogspot.com.br/2012/10/curiosity-vida-em-marte.html]