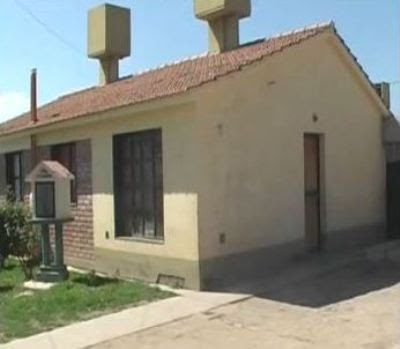 ARGENTINA. In the municipality of La Merced, province of Salta, a humble family claims to be the victim of attacks by evil spirits whose spectrums, that are manifested as shadows, are visibles. They believe that the purpose of harassment is to make the persons abandon the house, located in the neighborhood "40 Viviendas".

Santos Sanchez, the father of the family, says the nightmare began when the children, two teenagers of 12 and 16 years, commented about strange occurrences that happen in the house: shadows that roam through the rooms, pushing and hitting the people, unexplained cold air currents in any time of the day, even when the residence is completely closed.

In the week between the days 14 and 20 of October (2012) - the police were called. In his denounce, Sanchez reported that ... We had to leave the house because it was impossible to stay there with these spirits tormenting all us. What most impressed the police was reporting one incident when the girl, daughter of Sanchez, levitated for several seconds 50 cm above the floor.

But the police, confused by the situation, citing lack of objectivity in the occurrence, suggested the intervention of a priest. 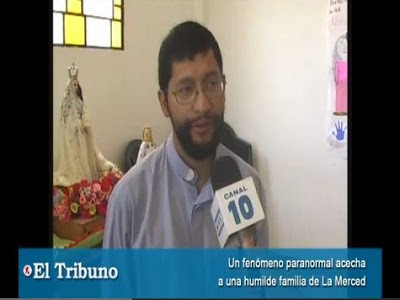 The Catholic priest Pablo Castro, convoked to exterminate the enemy: the blame is the "Game" (Ouija).

The town's vicar, the Catholic priest Pablo Castro, was called for execute "the mission". But for safety, police resolved to accompany the priest during the blessings. The priest refused the aid. Even thus, the ritual was scheduled to be done in daylight and a police patrol was thrown to monitor the procedure.

Arriving to the place, one of the officers knocked on the front door. The mother of the family opened and, in this moment, the officer received a strong blow and, struck by this invisible force, he was threw backward several feet in plain sight of all. Perplexed, the police was to seek support at the comissionership. Meanwhile, the priest would say ...I have everything under control.

Then the vicar entered the house and proceeded to "cleaning", profering prayers and blessings for several hours. After, he said he did not feel the presence of no devil and that the property could has been influenced by a cult of the Santa Muerte, or that the phenomenon may have been caused by some demonic entity, unconsciously attracted by someone in the family that can to have practiced some kind of ritual, as the "game of cup" or used the Ouija board, very common, currently, among the adolescents of the country.

About the "Game of the Cup", the religious commented: Many negative things can result from this practice. It is a dangerous joke that, in fact - atract the enemy (Satan, the adversary). These paranormal phenomena are the work of evil, of the devil. Maybe, this house might be needing a formal ritual of exorcism.

What we can say? Let's call the Winchester brothers...

THIS NEWS IN PORTUGUESE
[http://sofadasala-noticias.blogspot.com.br/2012/10/fenomeno-sobrenatural-expulsa-familia.html]