The Hell of a Buddha in Post-Modernity 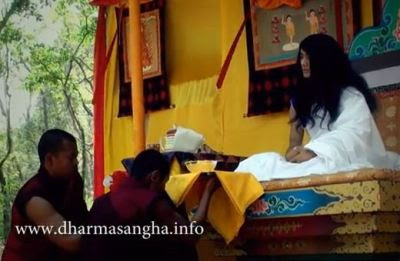 Ram Bahadur Banjam in his sanctuary in the forest of Halkhoria before to be banned by the authorities of continue on the place.

NEPAL. Shortly after the problem released between February and March this year (2012 - see the link shown on this page) about the kidnapping and captivity of two women - a nepalese and a slovakian, an action perpetrated by followers unwanted, rejected by the young nepalese guru Ram Bahadur Banjam (or Bonjom), known as the Buddha Boy or The New Buddha of Nepal (22 years in 2012 - born April 9, 1990) - a new controversy has promoted his return to the headlines.

Around two months after the incident last, in April (2012) - Ram Banjam was accused of complicity with those same followers, of the Foundation Bodhi Shravan Dharma Sangha, that would be keeping in false imprisonment the sister of the Guru, Ranjita - 12 years (in 2012), as a way of blackmailing his mother, Mayadevi.

Group members Dharma Sangh clashed with residents of Ratanpuri where Ram Bonjom resides in an attempt to free the girl. But confronted by a large number of fanatical followers of the Guru, they had to retreat.

The police was called. The inspector K.P. Sharma, of Simara, assured that the girl would be released and that the culprits would be punished.

According to the information of Himalayan Times, the goal is to get the citizenship card of her (of the mother), the only way to get the citizenship card of Ram Banjam. Mayadevi had refused to provide the document. With this, the Guru would remain a ghost citizen and, thus, he stays prevented from traveling. And rumors are that the young want exactly this: get a passport and leave the country.

Despite the admonitions of the Guru, who publicly repudiates the methods of so-called followers, members of Shrawan Bodhi Dharma Sangh would have tried to solve the problem by purchasing a fake birth certificate for the Master. On June 13 (2012), police arrested a clerk of the municipality of Ratanpuri - Bara, charged falsification of the document - in the case, a birth certificate for Ram Banjam.

The fact is that Ram Bonjom is surrounded by vipers: on one side the followers of Dharma Sangh Foundation, on the other, his own family, all interested in control and advantage of donations, goods and money that devotees offer Guru. 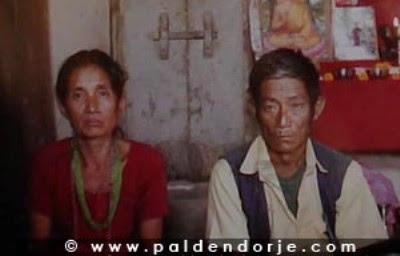 Ram Bahadur Banjam is descended from the called - Tamang Lamas. Tamang is the name of a people, a kind of nation, originating from regions of the Himalayas, Tibet and its traditions date back between 10 and 30 thousand years. In terms of religion they are followers of Nyingmapa Buddhism, the most ancient of the four schools of Tibetan Buddhism - that is dated between centuries VII / VIII AD (600 and 700).

The parents of the guru are small farmers. His mother Mayadevi, married at age 12. The couple had five sons and four daughters - of whom the Guru is the third. Reportedly during the pregnancy of Banjam, she became unable to eat meat without getting sick. The boy, from an early age also refused flesh. He used to leave home staying away for long periods. Always seemed to be lost in thoughts.

He preferred to be alone, studying instead play with the other children. He would read the scriptures, meditating for much time. Sometimes, would stop to observes a fig tree - that seemed to bring joy to him. Given this behavior, his father sent him to develop his studies with Samden Lama, in the nearby village. Later, to Sudha where continued his apprenticeship with the Som Bahadur Lama.

THE HELL OF A BUDDHA IN POST-MODERNITY

With all these incidents compromising his image, Ram Bonjom was banned by the authorities to meditate Halkhoria forest near the community of Dharahar - Bara district.

He left the place on Tuesday, June 5, in a jeep, at 10 am followed by nine followers bound for another forest, located in the district of Sindhuli.

On Thursday, June 7 (2012), armed police and forest security officers destroyed the premises in Halkhoria. Using a backhoe and other equipments, the team demolished about a dozen houses and huts, a three-story building and other concrete structures.

On September 17 (2012) Ram Bonjom was hosted in the home of a relative and devout, Gopal Yonjan (18 in 2012), in Syangdanda (something like a neighborhood) - Pattharkot-1 VDC (Committee of Development of Village, equivalent to municipality, a small city, administrative unit), Sarlahi district - west of Nepal. Yonjan commented: He (Bonjom) had no choice but to enforce the ban.

In the new address, Bonjom is in company of 15 disciples, all foreigners. But the young Guru is far from finding peace. There is already a plan to build a road linking the site where the Buddha is hosted Guy, 25 km east-west highway to the city of Pattharkot, said Gopal Yonjan. The goal is to facilitate the movement of 'visitors' eager to meet the young Illuminated. Or be - Bonjom already turned tourist attraction.

With all this movement and news of violent incidents earlier this year, the districtal subinspector of Sarlahi - Tapaswi Krishna - has said police are keeping constant watch on Ran Bonjom.

Gone are the days when a yogi could enter in a forest and passes years meditating.In this time when everything becomes merchandise, are not enough the shadows of a forest. Is need to disappear without leave a trace and hide itself in a hole somewhere remote, in a monastery where monks should agree in make a vow of secrecy under death penalty.

The problem is that Ram Bonjom began his yogic discipline to five years of age, in a location close to the house of his family. Since then, flashes and lenses of all types of camera never left him alone. No wonder the guy wants to leave Nepal and vanish in the world, and even then, you'll have to do it in disguise because his face and cabeleirasão known worldwide.

The problem is that Ram Bonjom began his yogi discipline to the five years of age, in a location close to the house of his family. Since then, all types of flashes and lenses of camera, never more left he to be alone. No wonder the guy wants to leave Nepal and vanish in the world, and even then, he'll have to use a false moustache, a hat and dark glasses because his face and and long hair are known worldwide. (This is because he lives at hinterlands of Nepal, not in New York).

The young will have to imitate the Buddha Sakyamuni that for escaping the palace where his father kept him away from the world and of his spiritual mission, stripped the his prince clothes, passed the sword in hair, blew away his beloved horse - Kantaka - before of throwing himself into the river and to swim, leaving to back the borders of his kingdom. 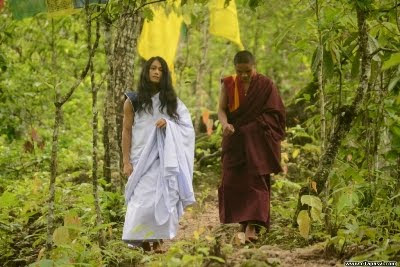 Before taking shelter in the house of Gopal Yonjan, Ram Bonjom passed a time in forest Kamalamai, Sindhuli district. But... he was found by the mass midia. There - one of his disciples, Darsan Limbu, who did not allow that the reporters approach the Master, said:

Our Guru is writing about the Religion Bodhi (Sacred Wisdom Religion, Perfect Wisdom, spiritual enlightenment, Receptive Intelligence), that he learned during his meditation and penance (fasting and yoga practice).

Limbu also said that the family of Bonjom began a campaign against him (the guru) because Ram Bonjom don't allowed them to control the funds raised in his name.

The text is being written in Sambhota, a kind of Tibetan script based on an alphabet invented by Thönmi Sambhota, a Wise - who lived in the seventh century AD (year 600), one of the counselors of Emperor Songtsen Gampo (569-649? / 605-649 ?). The book will be translated into 17 languages​​, including English and Nepali traditional among others.

RELATED LINK - When Buddha-Boy Has To Be Bad Boy
[http://brazilweirdnews.blogspot.com.br/2012/05/when-buddha-boy-has-to-be-bad-boy.html]

THIS NEWS IN PORTUGUESE
[http://sofadasala-noticias.blogspot.com.br/2012/10/assedio-o-inferno-do-buda-do-nepal.html]