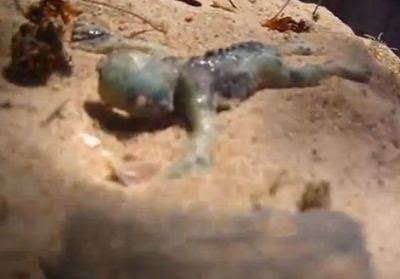 In the images, is possible to see that - be what be - is alive because, seeming to make effort, raises its head. That is small, this can be deduced by comparison with the remains of algae and sticks around.

AUSTRALIA. A humanoid creature, small, a living being - that is being called baby-mermaid or "alien" - in the sense of strange - was allegedly found on a beach in Queensland, Australia.

The video is on YOUTUBE. The comments, show a complete disbelief although at first sight the images - seem to be very clear - much better than many of the videos posted on the channel promising images of aliens, ghosts or bizarre creatures.

This video was posted on October 5, 2012 by a user who identifies himself only as H. Stewart. In principle, the "crime of Stewart" was the compassion. He writes that felt standing before a living being rare on Earth, distressed and in danger of death.

Therefore, instead of capturing it and display it, probably dead to the world, chose to return it to its habitat: the sea. How he knew the creature belonged to the sea? Possibly observing the anatomy of the hands and feet, characteristic of aquatics, for example.

Many will say (and said in the interlines of comments) that this was a "loss" for science but what is the real value of the scientific curiosity before the real risk of imminent death of a living being?

Considering the possibility that the video not be a hoax, the attitude of Mr. Stewart demonstrated a kind of solidarity and human sensibility that almost does not exist anymore. He prioritized the Life.

Will be that nobody can stop and think for a moment: as any of us would feel if instead of being rescued in a similar situation, somebody would have prefered collect and leave you die on the way to a lab to add a new - and possibly useless knowledge to the collection of scientific expertise of humanity? A Humanity that already knows so much and does so many things ethically questionable and - or reprehensible with this great wisdom?

Everyone finds beautiful and moving story of Speilberg's ET being saved by children from the hands of greedy and insensitive Science but the general trend, when faced with a strange creature, and especially fragile, is to put it in the box and look for a television channel. And if a huge creature? Bonnie and Clyde ... later, the television channel. "Human, All Too Human" ... Meditate ...

Everyone thinks how is beautiful and moving the story of the Speilberg's ET, being saved by children from the hands of the insensitive Science but the general trend, when faced with a strange creature, and especially fragile, is to put it in the a box and run to contact a television channel. And if be a huge creature? A hail of bullets ... after, call the television channel. "Human, Too Human" ... Let's Meditate ...

THIS NEWS IN PORTUGUESE
[http://sofadasala-noticias.blogspot.com.br/2012/10/estranha-criatura-humanoide-aquatica.html]