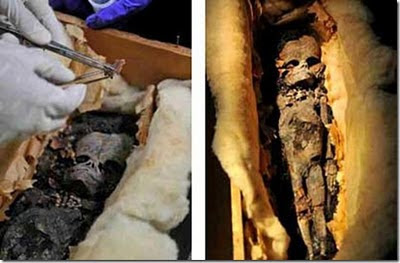 It's not a new news, to the contrary, goes back more than a decade, with a resgistro first found in 1997 but for some midiatic reason, hardly justifiable *, the subject returned to the headlines recently. Many blogs and - even - virtual newspapers have replicated the matter, some of them, using the same text, giving the impression that it is a recent discovery. Suddenly, the name of Viktor Lubek, the discoverer of this mummy, has become one of the most frequent key-words in search websites.

* However, the explanation is presumable: the lack of matters, the thirst for sensationalism, the incompetence of news researchers and lack of professionalism of some journalists and the recorrent practice, in the internet of don't to date the the facts mentioned in the texts. Eventualliy, an internaut finds a news like this, a photo and, thinking that is a recent happening and publishes the thing in a social network, like Facebook. Ready, the error turns a fever and then, amateurs journalists run to release the old theme like a fresh occurrence without any preoccupation in investigate the information. It's a shame.

This is the case of the mummy of Mr. Lubek. The photos of this extraterrestrial mummy, whose discovery has been atributed to a researcher named Viktor Lubek appears on Facebook since 2001. Other websites already had recorded the fact in 1997, as a Google search reveals in the the reference in spanish language: Los misterios olvidados del mundo y del universo. - Taringa! 12 abr. 1997 - Según la fuente egipcia, la momia extraterrestre fue descubierta por el Dr. Viktor Lubek... [http://www.taringa.net/posts/info/9444458/Los-misterios-olvidados-del-mundo-y-del-universo_.html] 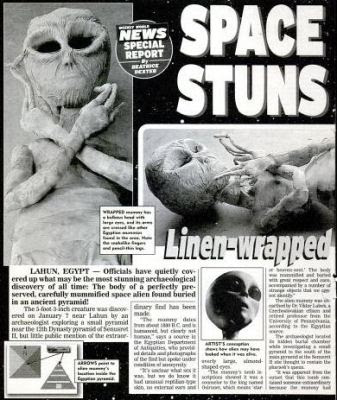 The reportage of WEEKLY NEWS magazine, 2003.

Years later, in 2003, the story about this mummy was published in WEEKLY WORLD NEWS magazine. There, an additional information: The mummy was taken to a University of Florida, where experts would examine it more closely (WEEKLY WORLD NEWS, 2003).

WHO IS VIKTOR LUBEK?

To complete the misinformation, the editor of this BLOG don't got obtain - after an exaustiv research, even in Czech language, no reference on this supposedly researcher - Viktor Lubek, the discoverer of the mummy. Nor a photo of the man.

Nothing but of what is repeated in all the news, current and from the past. Texts that are copied, the same in almost all the websites and nobody can know where or when began the story. All repeat: Lubek is a Czech citizen.

There is also no clarification on your exact local and date of birth, if still alive or about their academic formation. Noting, nor in Wikipedia in chzec or on the website of the University of Pennsylvannia. For reasons like this is that the records on strange facts or on the presence of aliens on Earth are object of derision for Science academic. 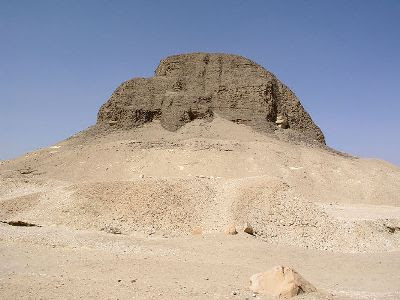 EGYPT. In a small pyramid (where was entombed the on of the queens of Pharaoh Sesostris, presumably Nofret II), south of the ruins of the pyramid of Senusret II (name which is pronounced - Sesostrys, also called Khakeperre - who ruled between 1882 and 1872 BC, Egyptian twelfth dynasty of Faros) - pyramid located in el-Lahun - Faiyum (a city located 180 km southwest of Cairo, capital of the country), Viktor Lubek, a retired professor from the University of Pennsylvania (http://www.upenn.edu/) at Philadelphia (Philadelphia), the largest city in the state of Pennsylvania - USA, being said about him that borned at Czechoslovakia, found a mysterious creature - what was anounced - in the midia as being the mummy of an alien.

The creature, measuring 1.50 and 1.60 meters tall, frail-looking, was entombed with special honors, along with a set of strange objects, similar to machines (WEEKLY WORLD NEWS, 2003) - made ​​of resistent material, apparently synthetic and absent in other Egyptian tombs - a material completly unknown by archaeologists. Lubek found the uncommon mummy while investigating a hidden compartment.

The mummification process of the creature included another unusual feature: the body, that was wrapped in a cloth that appeared to be linen , was covered with a mixture of gold and clay. Inscriptions on the tomb, according of a description of the photograph that is, supposedly in Egyptian Antiguities Department - obtained and disseminated by an anonymous source, indicated that the stranger be "was an councilor to Pharaoh" and his name was deciphered and identified as Osirunet, meaning "sent from Heaven "(WEEKLY WORLD NEWS, 2003) 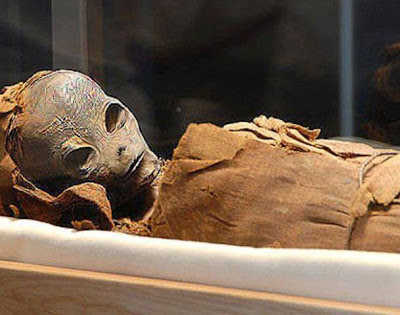 The photography, supposedly filed in Egyptian Antiguities Department [source (ASUSTA2/2010). It's not clear whether it is the Department of Egyptian Antiquities of Cairo Museum or of the Britsh Museum or even of the Louvre Museum - France. To complicate the information, the website of the Egyptian Museum, known like Cairo Museum, Egypt (http://www.egyptianmuseum.gov.eg/), is outside the network, what is not surprising in these times of Islamic rule in the country].

Currently, it is unknown where the mummy. Its datation, as it was found in the pyramid of the pharao's queen, Senusret II, is estimated in about 2000 years and their face would be recognized, by any ufologist, as belonging to an alien of the Grey race. The Museum [Egyptian Museum] also has images registration of these strange presences in the Egypt of the pharaohs depicted in ancient murals. 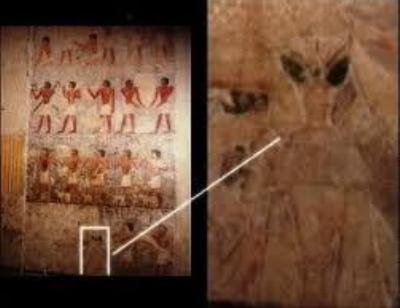 Even being a true that the amateur journalism about extraterrestrials in the Antiquity is subject to the suspicious of the orthodox science, academic, images like this, this strange being, represented in an ancient Egyptian mural, is like a kind of redemption for scholars of the extraterrestrial archeology and history, evidence of the presence of cosmic visitors, humanoids, uncommons beings that existed, living among the men in ancient times.

The discovery of this extraterrestrial in an archaeological site in Egypt is not unique. For over 120 years, similar discoveries have intrigued researchers. Other specimens - can exist in the custody of the Britsh Royal Museum of Natural History but the curator of this museum in London, do not talks about it.

Photographic evidence of these mummies in their sarcophagi were collected, in video and books, by researcher David Innis. 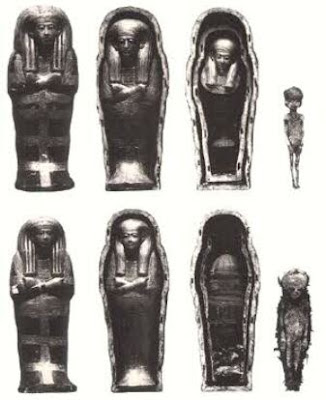 Photos of a sarcophagus containing a mummy alien baby, found near the mummy of Tutankhamun - were obtained in the Cairo University. Images: "Secrets of the Pharoahs: Search for Ancient DNA". DISCOVERY CHANNEL / DOCUMENTARY.

On these photographic records found in the tomb of Tutankhamun, Inner wrote: What is about to be shown is something that never was talked ... What never was said is that when the mummy of the boy-king, Tutankhamun, was discovered by Howard Carter in 1920, next to it, were found, buried, along with artifacts of gold, the mummies of two babies. One of this mummies is, without doubt, an alien Grey (INNIS, 1999).

THIS NEWS IN PORTUGUESE:
[http://sofadasala-noticias.blogspot.com.br/2012/09/viktor-lubek-e-mumia-do-alien.html]