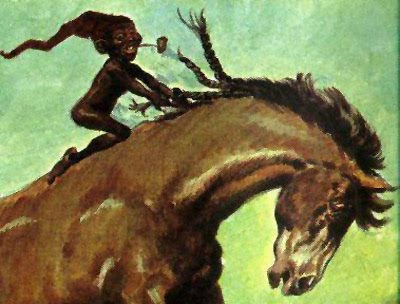 At Brazil, from the south to the north there's the registration of Saci's tradition. In october, 31 ─ the day of the Saci is celebrated. The Saci is a folkloric figure. His myth is the results from the cultural syncretism characteristic of the country. It brings together elements Amerindians, Africans and Europeans. The entity is a black skin dwarf, one-legged, like some elves and gnomes of the european folklore with their dances, turning on a leg. He's a kind of demon: sometimes joker, sometimes malefic. Like identity attributes, he uses a red hat and smokes a pipe called pito [peeto].
Generally, the pito, a craftwork, is made of clay. In the days of strong wind, the Saci likes to have fun revolving around itself to create eddies. For the simple people of ancient times, residents of rural areas, the Saci is the cause of the eddies. But the little devil has others occupations, all with the goal to create daily problems in the lives of the people.
At the farms and small towns, he enters in the homes and hides small objects. In kitchens, makes the milk stay sour, spoils the eggs. In the stables, embarrasses the manes of horses, sucking her blood and bewitches the animals, which spend the night galloping madly.
The Myth Formation ─ Before the arrive of the europeans on the land of the south-american continent, the brazilians indigenous already knew their Sacis. The Saci was a ghost, an enchanted being associated with a bird whose lament was considered bad omen. This bird, also called Matita-Pereira between another names, often adopts the posture of standing, long time, leaning on one leg.
Later, with the arrival of the Portugueses and then enslaved blacks, similar beliefs of the three nations were mixed in the imaginary of the people. Finally, was configured the Saci anthropomorpho: the one-legged, the little black kid with his red glengarry and ever with the pipe in the mouth. He is tiny, one-legged and black, like the bird appears. Wears a glengarry like a european gnome. Smokes too much. Fume roller. Like a slave, poor and tired.
The Saci has a social and spiritual explanation too. He is tiny because, one day, in a time of the past, he was a mestizo child abandoned in the woods. A newborn who died without baptism. A pagan soul. Son of the adultery, of the abuse and violence. His mother was a slave, his father, certainly, a foreman or a plantation owner. The dead child becomes an evil ghost who has pleasure in perturb the Christians.
Weak Point ─ The Saci has his weak point. His powers of invisibility and witchcraft are on his glengarry.If someone gets the glengarry of a Saci, the demon immediately becomes slave of him who possesses the object. The difficulty is to imprison the Saci. You have to surprise him when he is in the midst of a whirlwind. The trick is to launch a sieve, reforced with a support cross, on the spiral of dust and leaves. It is the cross that holds the Saci. After, by introducing a dark bottle below the sieve, the creature, surely, will go enter there, in the bottle; because he likes the dark places. by Ligia Cabús, 11/01/2009