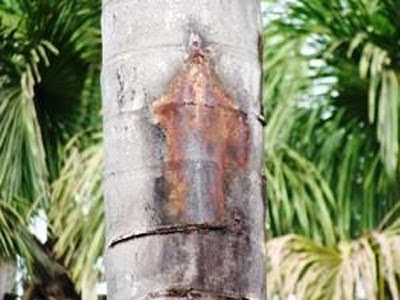 PIAUÍ state ─ [Northeast region of Brazil] All began in early october [2009]. At Currais city the image of a santa appeared in the trunk of a tree called buriti, [em Inglês, Morish Palm - Mauritia flexuosa]. Since that the picture of the santa was found and disclosed, it has attracted many people: some, for mere curiosity; others, moved for faith. These consider the phenomenon as a miracle or sign of God.
Testimonies of miracles have already begun. Those who were supposed blessed are speaking on local radios. Mr. João Batista, who was physically handicapped and never was able to walk, today is walking, after he visited the Santa. He tells that after has seen the image, felt a strong sleepiness and slept. He dreamed with the Saint, with Jeovah and angels. when he waked, began to walk. Mr. Batista hasn't doubts: belives that God cured him.
Another man named Gaspar said that if the image realy was able to make miracles, he would want to fall hard. Two days after suffered a stroke. He stood immobilized and now lives on the bed.
Source: Imagem de santa em pé de buriti provoca repercussão
In 180 Graus Brazil ─ published in 11/04/2009
[http://180graus.brasilportais.com.br/currais/imagem-de-santa-em-pe-de-buriti-provoca-repercussao-249737.html]