UFO - Strange and bright, a Huge Cylinder Penetrates in the Popocatepetl Volcano 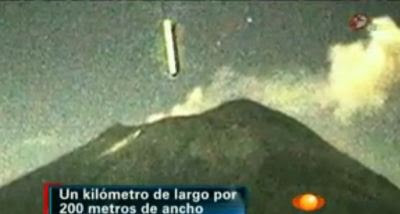 The object is precipitated as a huge light stick inside the crater.

MEXICO. On Friday, October 26 (2012), the camera that Televisa maintains permanently monitoring the activity of the volcano Popocatepetl, registered the moment when a strange light came down from heaven and, apparently - entered in the giant's crater.

According to experts (and how is saw in the video), it was a bright object. Its sized was of approximately 1 km long and 200 meters wide with cylindrical shape (in the longitudinal direction, the object is precipitated as a light stick inside the crater.) The direction from which came could not be determined because its speed is much higher than that of a plane.

The astronomer in UNAM, Margarita Rosado, a member of the International Astronomical Union, who observed in details luminous objects seen in the area for 15 days of April (2012) - when the volcano showed increased activity commented: It's an interesting thing. If it was something that emerges, would be possible to think in natural causes but an object that falls on the crater is really unusual.

Rosado ruled out the possibility of object be released by the volcano like glowing material or - even that it would be a meteorite. The scientists consider the characteristics of the object as something strange: its shape well defined in which is possible to distinguish the edges, bright colors and their variants and no-interaction with the gases from the volcano.