The Giant Vampire of Waters of Allen 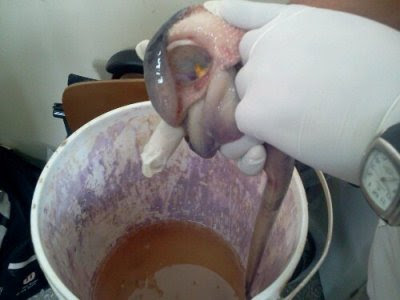 Ugly fish that seems a worm. Besides the aspect scary and disgusting - this lamprey, that was considered abnormally large for its species showed aggressive behavior trying to attack a woman.

ARGENTINA. In October 12, at the city of Allen, province of Rio Negro - Argentina, a strange animal was found in a creek and apprehended by the staff of health surveillance after trying to attack a woman of 25 years who was washing clothes in the place. The woman, with the help of neighbors, escaped the attack. But the incident mobilized the authorities. Until the Civil Defense was called.

The specimen, that was given to sanitation team from a neighboring town, General Roca, where experts have better conditions to examine him - was identified as a lamprey (Agnatha, a name derived from the Greek meaning "jawless" - Edward Drinker Cope, 1889) but in this case, with the huge dimensions, about 50 cm long, the individual was considered by biologists like giant.

The creature is endowed with a cavity, like a mouth, with a unique tooth . Consisting of soft tissue, has eyes, gills, fins and a long tail. Also called "water vampire", the lamprey belongs to a class of jawless fish and even remembering an eel, has no relation to that other kind of animal.

The denomination "vampire of waters" has a reason to be: these animals, the last representatives of ancestors that lived in the Paleozoic Era, there over 300 million years, are hematophagous and necrophagous.