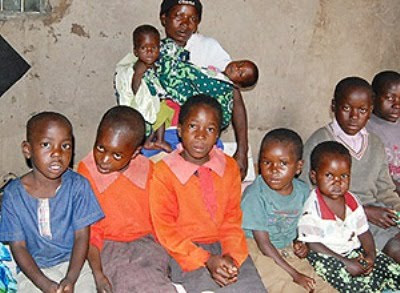 Gladys Bulinia: She lives alone with 10 of
her children, a few miles from Lake Victoria.

KENYA, Africa – Gladys Bulinia, 35 years old (in 2011), a woman of Kenya, is a person considered cursed in her community. The reason for this: She gave birth to six pairs of twins in each one of her pregnance periods. Were six times even now. She is very poor and has twelve sons. The problem is that this woman belongs to nation or tribe of the Bukusu and according the tradition of this culture, the birth of twins is a sign of bad luck. Six double of twins is an astral danger!
When became pregnant the first time, she was a high school student. Her boyfriend was too young to marry. Then, her family ordered her to leave the babies at the hospital for adoption.
The babies were rescued by the father of the her boyfriend. The grandfather decided to take care of the two. This man hasn't the same beliefsof the Bukusu. He is a Kalejin, a different ethnic group.
Five years later she married a primary school professor.Then it happened the first pregnancy and everything resumed. Were twins. And twins continued to birth. Five times. Ten children. In the fifth pair of twins, the husband put her out of home along with ten children. All of them were considered cursed.
Now, Gladys Bulinia is an abandoned woman that fight to sustain her family. She lives alone with 10 of her 12 children, a few miles from Lake Victoria, in a thatched house that has only a one tiny gunroom.
SOURCE: Após seis pares de gêmeos, mulher é considerada amaldiçoada.
IN O Diário – Maringá city/Paraná state – published in 01/27/2011
[http://maringa.odiario.com/blogs/luizdecarvalho/2011/01/27/apos-seis-pares-de-gemeos-mulher-e-considerada-amaldicoada/].