The UFOs and dead fishes 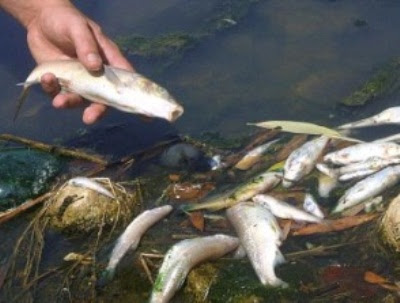 COLOMBIA – In Llanitos neighborhood, north of the city of Barrancabermeja, the collective death of two thousand fish is being attributed by the locals, to aliens. Witnesses said that saw an unidentified object that was hovering above the waters of a mangrove. The UFO emited a bright light and then, in few seconds disappeared. After that, the fish began to appear floating dead in the water. These fish showed signs of burns on the scales and gills.
A woman that is community leader from El Llanitos reported that the apparition of UFO phenomenon's lasted about 20 seconds. In the district of Puente Sogamoso, Puerto Wilches city, others people reported that they also saw the object, which was round and flew over the area with lateral movements.
The Municipal Department of Environment says the deaths are related to lack of oxygen in the waters of the swamp but the Fishermen's Association has rejected this hypothesis claiming that there was never a fish kills like was registered, now, in Barrancabermeja.
Furthermore, there is no known reason for this supposed lack of oxygen in the water. A committee headed by Environment Secretary, Isaac Lopez will inspect the marsh in order to ascertain the real causes of the phenomenon.
SOURCES
Mortandad de Peces en Barrancabermeja es atribuida a fenómeno sobrenatural.
IN RCN Rádio – published in 25/01/2011
[http://www.rcnradio.com/noticias/25-01-11/mortandad-de-peces-en-barrancabermeja-es-atribuida-fen-meno-sobrenatural].
Muerte de peces en Colombia es atribuida a "fenómeno sobrenatural".
IN El Universal – published in 25/01/2011.
[http://www.eluniversal.com/2011/01/25/int_ava_muerte-de-peces-en-c_25A5042971.shtml].