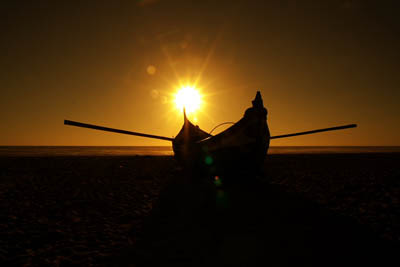 PIAUÍ ─ At Poty river, at the passage that goes from Petrified waterfall to the Primavera bridge [Juscelino Kubitschek bridge], north zone of Teresina [capital of the state], a ghost canoe is scaring the population. A man, that works at night at this place, relates: I've seen the canoe three times, ever at dawn. When this boat passes, the oars move as if someone was be there, paddling but there is no one. I felt a chill in my body, felt fear.
A housemaid that works at a tall building called Beverly Hill Towers, at Marechal Castelo Branco avenue, Eusana do Livramento, 23 years, saw the ghost boat too: I was closing the window because wind was strong at this night. Then, I saw the canoe, the oars moving itself and nobody was there. Was very strange. I couldn't explain it. Other witnesses reported the same history. One more time we don't have a japanese at the local with his hightech camera to register the phenomena, Neither a one mobile phone's camera. Let's meditate...
Source: ALENCAR, Roberto. Canoa misteriosa assombra as pessoas no rio Poty
In 180 Graus Brasil Portais/Gazetilha ─ published in 08/07/2009
[http://180graus.brasilportais.com.br/gazetilha/canoa-misteriosa-assombra-as-pessoas-no-rio-poty-229895.html]