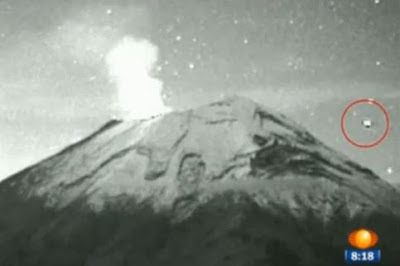 MEXICO. After the cylindrical UFO that was spotted, apparently, diving into the crater of the volcano Popocatepetl - Friday - 26/10/2012 - by the Televisa camera that constantly monitors the activity of the steamy mountain, another occurrence of two transit Unidentified Flying Objects was registered on Thursday, November 8 (2012) - in image taken at 5:45 pm.

Although some have doubts about the nature of the objects that the video shows, crossing the sky near the volcano and even, while others are mocking the Televisa channel for reporting the fact in their tele-journals, the sequence actually captured the passage of two luminous objects in the space around the Popocatépetl, an area completely and officially banned the transit of any earthly aircraft.