The cannibal leopard of Nepal 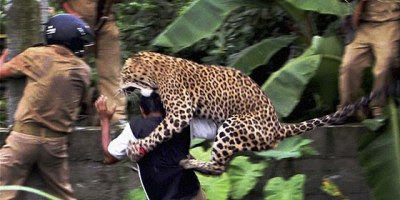 Another case: at India, a leopard in full attack to a police officer. Deprived of the forests, their natural habitats, large predators are vying for space with humans in the vicinities of the new urban areas.

NEPAL. Saturday, November 3, 2012. The head of a child of 4 years old that had disappeared on Friday (02/11/2012), was found in western of Nepal. The boy was attacked and eaten by a mysterious and ruthless leopard that is terrorizing to the people at the country.

The police chief of the district of Baitadi - Kamal Prasad Khael, told EFE news agency that the head was found about a mile from the house where the child lived, near to a forest.

In three months, there are already 16 - the fatal victims of feline, 11 children and five women, of whom the oldest was 29. Police suspect it is the same animal that is hunting humans ... because this kind of predator always hunts alone.

In Baitadi district, the population is alarmed. Experts were called in to try to locate the leopard and a reward of 25,000 rupees (about $ 300) is been offered for the capture of the beast.

According to experts, the attacks of big cats to humans are proliferating in the Indian subcontinent because of the process of industrialization and urban expansion that every day is exterminating the forest enviroments that are the natural habitat of these predators.

THIS NEWS IN PORTUGUESE
[http://sofadasala-noticias.blogspot.com.br/2012/11/o-leopardo-antropofago-do-nepal.html]