The Mystery of UFOs Squadron at China-India's Border 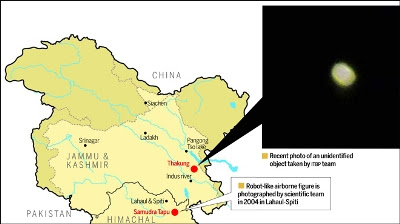 INDIA/CHINA. Soldiers of the Indian Army and the ITBP - Indo-Tibetan Border Police Force, based in Thakung, next to Pangong Lake have reported and are reporting hundreds of UFO sighting at Ladakh, in Jammu-Kashimir Region.

The massive presence of this objects, that have been seen during the day and night, occurred specifically and respectively, in the days August 01 and October 15.

According to the India Times newspaper, witnesses describe UFOs as yellow spheres that appear on the horizon of the Chinese side and moving slowly, crossing the sky for periods between 3 to 5 hours. Suddenly, they disappear.

The information is from reports sent by Indian Border Police (ITBP) to its headquarters in Delhi and also directly to the office of the Prime Minister of India, Manmohan Singh. 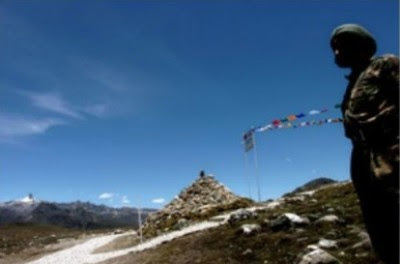 Indo-Tibetan Border Police Force (ITBP) in the region of the sightings.

Several agencies have attempted to identify the nature of objects - without success. In September, the Indian Army has deployed a mobile radar but the spheres appear to be invisible to the equipment. Also is been used a spectrum analyzer but this also failed to detect any signs that they might be being emitted by UFOs. Reconnaissance flights don't had unsuccessful. UFOs simply disappear before any approximation or approach. 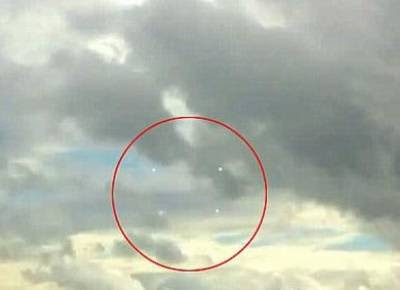 All that the army was able to determine what these yellow spheres AREN'T. They aren't drones (unmanned aerial vehicles). In addition, a team of Indian Astronomical Observatory, Hanle in - studied the phenomenon for three days and ensures: are not celestial bodies of any kind, such as meteors or planets. What they know with certainty so far is that the objects are not metallic. 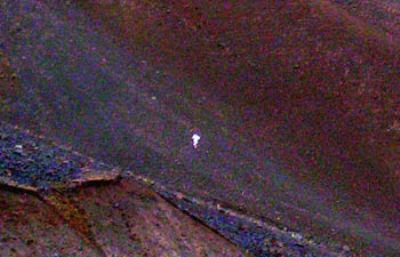 In 2004, this flying object with the appearance of a humanoid robot was photographed in Samutra Tapu.

The perplexity of Indians is justified. They are familiar with spy drones. only between August and January of this year (2012) were detected 99 of these flying vehicles unmanned: 62 in the western sector in Ladakh and 37 in the eastern sector in Arunachal Pradesh.

Three of them were in territory claimed by Índia along the border of 365 km with China. But given the enigma that surrounds these sightings, these orbs are being called Unidentified Luminous Objects undentifyed - or ULO.

Ladakh is an uninhabited region of 86,000 km ², heavily militarized, situated between an area of Kashmir occupied by Pakistan - at northern - and Aksai Chin - at east, occupied by China. A land that has been the subject of a long dispute in geopolitics that remains with no solution on for decades. 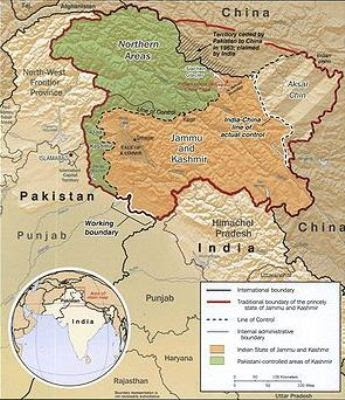 Kashmir. The disputed territories: Green: Azad Kashmir and Northern Areas under Pakistani control; dark brown: Jammu and Kashmir under Indian control, Aksai Chin, under occupation of China. Situation of the people: a Hell! Specially, one more of the muslims Hells!

Kashmir is one of the states of India despite its territory have been divided by geopolitics disputes that started since the end of British colonization and recrudescreram from the creation of the Muslim state of Pakistan.

The Pakistani claim is based on the fact that, there, the majority of the population is Muslim, which entered, in India's territory, trough this border north, They were refugees and migrants in general but, over time, they began to promote the customary Islamic terror to impose their religion, in true, a pretext to obtain the economical control, how always has made, when they find opportunity, in all the countries which receive them.

Since 1980, muslim separatist guerrillas, began to terrorize the Indian Kashmir. There, is located the known and mythical supposed tomb of Jesus, the Christ Jew who, according to theories, after his resurrection, had taken refuge in that region, in Srinagar - capital of the state, where he became a master revered even today.

The mystery of these UFOs or ULOs raises yet another speculation: that the spheres are holographic images projected by China as a strategy of intimidation and psychological warfare and a probing in order to assess the capabilities of the Indian state in a situation of alert. (A combat technique of the ancient Chinese and Japanese warriors - (these, the samurai) - the so called "fake attack" or the attack of the shadow).

THESE NEWS IN PORTUGUESE
[http://sofadasala-noticias.blogspot.com.br/2012/11/o-misterio-da-esquadrilha-de-ovnis-na.html]