Hundreds of fishes found dead in lakes of Brazil Central 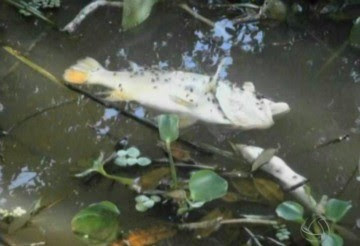 Hundreds of fishes of various species and sizes were found dead in lakes of Brazil Central. Photo: TVCA

BRAZIL. MATO GROSSO state. In the city of Porto Alegre do Norte, distant 1,143 km from Cuiaba (capital of the state), hundreds of fishes of various species and sizes were found dead in the waters of  "Lago de Fora" (Lake of Out), situated in a environmental preservation zone at the region called Araguaia.

The opinions about the phenomenon, however, are controversial. An expert of the Secretary of State Environment (SEMA) reports that since October, the same problem is occurring in the other five lakes State Park Araguia and even thus says that it is a natural phenomenon.

But the representative of the Pastoral Land of the Catholic Church, Luis Claudio Silva - classifies the phenomenon as environmental chaos. For Luis Claudio the fishes death is fault of pesticides used in a soybean nearby the lakes: The poison used in these crops, that is sprayed - on the fields - by airplanes, may have contaminated the water.

The coordinator of the Unidade de Conservação da SEMA (Unit of Conservation of the Secretary of State for the Environment), Alexandre Batistela, raises a third possibility: an increase in the volume of organic matter that, carried by the heavy rains, can has reached rivers and lakes.

The situation may have been exacerbated by a fire, suspicious of have be caused by human agents, that recently destroyed 80% of the park vegetation.

At Brazil, the most absurd on this type of occurrence is the slowness of the investigation of causes. Just as in that case. The death of the fishes is happening already there a month in five lakes, but, during whole this time, none laboratory analysis about the causative agent of these deaths was provided by the "experts" .