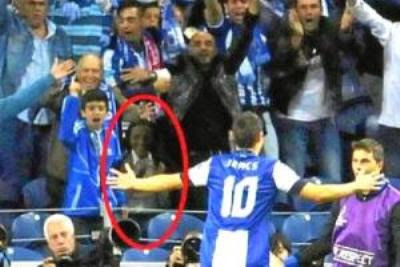 PORTUGAL. It happened on October 03 (2012) in one of the most unlikely places for the occurrence to this kind of phenomenon: the Estadio do Dragão, city of Porto - Portugal (Dragoon Stadium).

During a football game of the Champions League's agenda, contest between the teams Porto (Portugal) and Paris Saint Germain (France), that finished with result of 1-0 for Porto, the cameras that recorded the celebration of the goal scored by the colombian James Rodríguez , captured the presence of a ghost among the fans who celebrated in the stands.

With fists clenched and a smile on his face, spectral man appears to share the enthusiasm of the fans. Evidently, many netizens who read the news observing the photo, they comment that it is "a montage." However, no confirmation of this hypothesis nor reason to justify the impossibility of a lost soul - attached to the living world - attend a football game and rejoice in the victory of their favorite team.

According to doctrine of Spiritism Kardecist and of the theosophical spiritualism, this material world is filled with spirits that remain on the earthly plane for different reasons, being that the most of these motivations are far less innocent than a passion for football.

They are lost souls who can not overcome the past life prisoners of inferior feelings like anger, revenge, resentment and other appetites - less subjective - like vices in alcohol and drugs, sex, greed, attachment to material goods accumulated. Some are linked to places that marked their physical existence. Others do not, moving with freedom between different places.

(Also according to spiritualism) ... Many of these souls pass can be found in homes, in shopping malls, on beaches, in public buildings such as offices and prisons, and why not (?) - if they loved football, in stadiums where are happening a game ... a football game ...


THIS NEWS IN PORTUGUESE
[http://sofadasala-noticias.blogspot.com.br/2012/10/fantasma-flagrado-em-jogo-da-liga-dos.html]