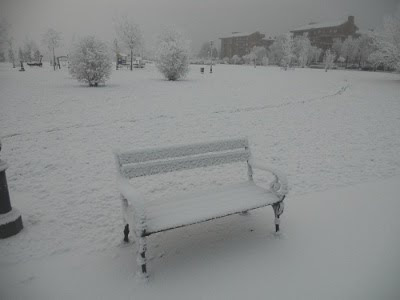 ITALY. Snow without clouds. Chemical snow! This strange phenomenon that has occupied in headlines of italian newspapers is terrorizing citizens of Piedmont and Lombardy. How ever, when nothing more can to be done, authorities say that there isn't motive for panic and and the situation is under control. Experts explain: the phenomenon observed in the last days (in january, 2012) is due to the arrival of cold air masses from the Arctic that reach the Pó Valey (river Pó), one of the most polluted regions of the world.
Some other scientists agree that the chemical snow isn't prejudicial for humans, animals or enviroment but, at the same time, warn thatpersons should not to ingest the substance, a greater risk to children that play on the streets and are handling this snow inadvertently. They add: the persons should avoid the contact the snow in parts of the body such as eyes and mouth. (After this warning, I would avoid to put nose out of the home).
This type of phenomenon is a combination of the fog (water vapor condensed) in cold temperatures, negative temperatures - mixed with polluted dust and other industrial waste in the atmosphere what are common in urban centers (very polluted sites) as in northern Italy. This snow, that is not really a snow - has been covering the landscape of the region. One more time, it's hour of return to read the books of the ancient prophets. Us meditate...
SOURCE: Neve chimica: ultime notizie pericolo. IMAGE: [www.meteoforum.com]
[+] IMAGES: [http://www.meteogiornale.it/notizia/22313-1-pianura-padana-grande-gelo-fra-galaverna-e-neve-chimica]
DOTTOR SALUTE, published em 19/01/2012.
IN [http://www.dottorsalute.info/2012/01/19/neve-chimica-ultime-notizie-pericolo/]