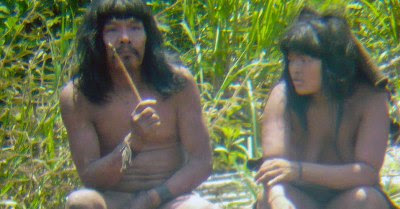 More photos: [http://noticias.uol.com.br/ultnot/cienciaesaude/ultimas-noticias/2012/01/31/ong-divulga-fotos-ineditas-de-tribo-isolada-na-amazonia-do-peru.jhtm]
PERU. The (non-governmental organization) NGO Survival International publicized unprecedented photographs oround of 100 tribes isolated of the world, like the Mascho-Piro, a indigenous nation that lives in the Parque Nacional de Manú (Manú National Park), on the peruvian amazonia, south east of Peru.
These photos are the more detailed and nearby to the tribe whose sighting is occuring, each time more often in the Park. Manybelieve that the deforestation makes that they leave their natural habitat.
The contact with these tribes can be dangerous. Recently, at the Manú Park - an indigene acculturated, a man, Nicolás Shaco Flores was killed by a arrow of a native belonging to an isolated tribe. During the last 20 years, Flores did put, in marked places of the forest, food and gifts for a small group of the Mashco-Piro. Access to tourists at the site was closed after videos show they were offering clothes for the Indians on the banks of rivers.
FONTE: ONG divulga fotos inéditas de tribo isolada na Amazônia do Peru
UOL Notícias, published in 31/01/2012
[http://noticias.uol.com.br/ultnot/cienciaesaude/ultimas-noticias/2012/01/31/ong-divulga-fotos-ineditas-de-tribo-isolada-na-amazonia-do-peru.jhtm]