+ A CASE OF LITHOPEDION - THE STONE BABY OF COLOMBIA 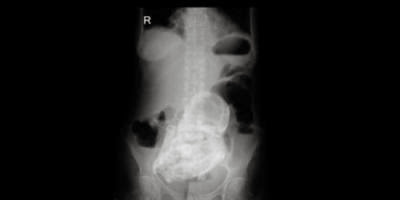 The x-ray of the patient
RELATED LINK


COLOMBIA. At Bogota city, the capital of the country - was registered over a rare and bizarre case of Lithopedion, petrification of a fetus that died in the womb and was never expelled or extracted.

The host of the freak, is a woman of 84 years old and suffers from dementia - because of old age. Complaining of severe headaches and diarrhea, she was taken to a hospital by relatives.

As the preliminary tests - physical and laboratory - did not reveal any abnormality, doctors did an x-ray of the patient.

Then it was found that the womb of the old lady housed a calcified fetus, fetus whose age was estimated at 32 weeks of pregnancy - around 4 months.

The epoch of the organism's obit was estimated by doctors at about 40 years ago but, the dead child remained in the womb and this organ became to be its tomb.

Doctors and relatives agreed that the most appropriate procedure would be the removal of the small unborn deceased. The surgery, scheduled for Wednesday - Day February 5, 2014 - will be held at a university hospital, in Bogota.

RELATED LINK
May 28, 2012
46 Years in the Belly of the Mother - The Parturition of the Stone Baby
[http://brazilweirdnews.blogspot.com.br/2012/05/46-years-in-belly-of-mother-parturition.html]