THE ALIENIGENAS MYSTERIES OF VOLCANO POPOCATEPETL 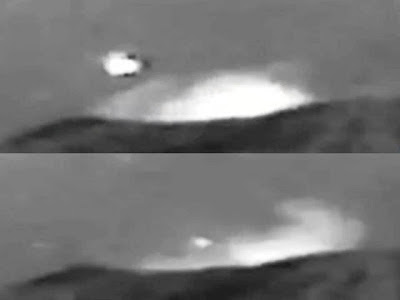 On above image stands out (on the lower of frame), the effect of the UFO's propulsion power, that is dispersing the dense cloud of smoke which coming out of the volcano. 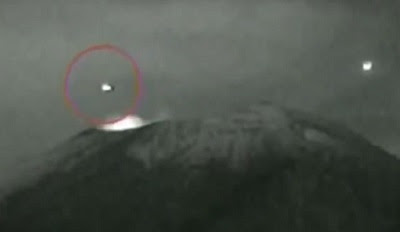 Apparently, these alien vehicles have technology that makes them invulnerable to the high temperatures produced by rocks in melt into the deeps of the mountain.

This is just one of the numerous records of alien activities (strange, unusual, perhaps non-human) in the vicinity of the volcano and the crater itself, an extremely hostile to humans or to any known living being. 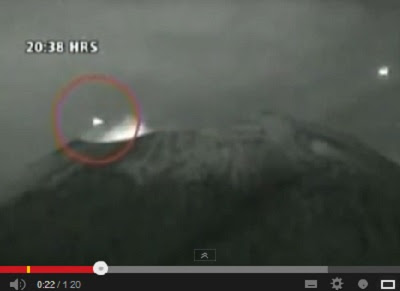 State of Puebla, near the town of Atlixco (25 km south of the capital of that state, the city of Puebla de Los Angeles) - An unidentified flying object was seen and filmed by a team of the WEB / Radio-TV Centro de Investigación Rueda Cósmica -  Asociación Civil [CIRC-AC, www.circac.org.mx/], during a journey ona  highway - near the archaeological site of Cacaxtla - in direction to the city of Mexico.

The bright spot emerged slowly, as crossing the dense layer of clouds and moving between the craters of the volcanoes Popocatepetl (5,426 m high) and Iztacchuatl (5,230 m). 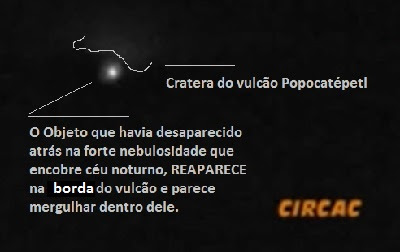 ABOVE: The object that had disappeared behind the heavy clouds, reappears on border of the Popocatepetl volcano crater. 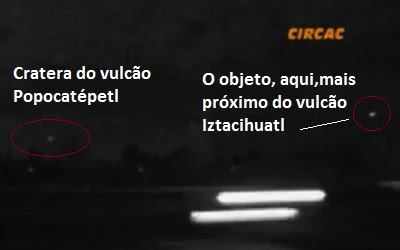 LEFT: Popocatepetl crater. RIGHT: The object, at this moment, is more near to the Iztacihuat vulcan.

The sighting was reported (in video) by the representative of  Centro Ufológico CIRCAC, José Luis Rueda, who highlighted the strong light from the object: The UFO was visible from Puebla and you could tell he was over the Popocatepetl.

First, circulates near the volcano Iztaccihuatl (located north of Popocatepetl, central Mexico). Disappears for a few moments, and reappears in the crater of Popocatepetl and then - seems submerge accentuating the light emanating from the fiery mountain. (The images only was recorded because de cameraman used an infrared lighting).

In fact, despite the sky to be heavily cloudly, which appears to be a ball of light appears below the clouds near the Iztaccihuatl volcano and goes to the crater of Popocatepetl where, after pause for a moment, quickly , disappears. It can have dipped in the mountain or, perhaps, in the back of it.