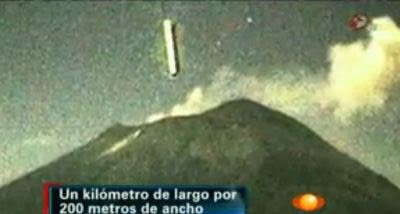 UFO - Strange and bright, a Huge Cylinder Penetrates in the Popocatepetl Volcano,  October 28, 2012
[http://brazilweirdnews.blogspot.com.br/2012/10/ufo-strange-and-bright-huge-cylinder.html]
It gone out - The Mystery of UFO-Cylindrical in Popocatepetl Volcano, November 16, 2012
[http://brazilweirdnews.blogspot.com.br/2012/11/it-gone-out-mystery-of-ufo-cylindrical.html]

At Mexico, the connection between the active volcanoes and transit of unidentified flying objects is quite common. However, in case of the Popocatepetl,  the movement of lights, fireballs with different formats, present an intensity overt in bold maneuvers that include dizzying dives in glowing crater.

Recently - in 2012 - episodes like these caught the attention of the media raising speculation, dividing opinions. In the video portal Youtube, were released countless reissues and reproductions of images taken by the cameras of the CENAPRED - National Center for Disaster Prevention, of Mexico, which monitors the activity of the volcano.  So, these are images released by an official channel of information.

This monitoration, necessary providence for the population security, showed a huge object, resembling to a great stick of light, at different times, plunging in the steaming entrails or, yet, at least one time, leaving from the crater. Thus, the Don Goyo seems to be a kind of home or a gateway for the aliens on Earth.

TENS OF SIGHTINGS HAVE BEEN REGISTERED NEARBY VOLCANO POPOCATEPETL. Those images caused great excitement, and yet, not only the of CENAPRED but also others - recorded by numerous other cameras. Professional and amateurs have recorded similar events, equal or yet more impressive - along the last twenty years. 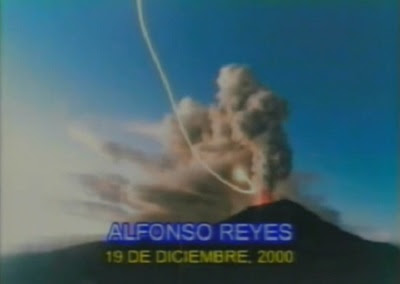 Then, we have the volcanos. Specially, the volcan Popocatepetl... near Mexico City. I have received some strange videos. Many people go there to see them [Ufos]. ...Lights that stay [appear] near the volcano (MAUSSAN/video-palestra, 2005).

Are UFO sightings at the sky and on the glaciers around the edges of the peak, where the smoking crater seems to harbor, with familiarity, the luminous entities that usually wander between the convulsion of its igneous rocks.

On the land, the folk speaks and researchers have records of strange humanoid beings, whose presence in the region is so old that it is almost a legend of the woods that surround the mountain.

There are some who say the Mexican volcanoes are operational bases of aliens, others believe that volcanoes are source of some mineral interesting or necessary for visitors, or even that in the craters of these mountains there are entries, portals, for an underground civilization, where would live arcane intraterrestrial races, perhaps reptilians.

The researcher Jaime Maussan draws attention to the possibility of a direct relationship between the activity of the Popocatepetl and the presence of UFOs and aliens, not only nearby but also and amazingly - inside the volcano.

Maussan highlights the coincidence of intensification of volcanism on the mountain at the same time, from the 1990s, which intensified sightings (and recorded images) UFO in the sky and humanoid alien beings on the earth (nearby volcano). Moreover, he believes that aliens can control the frequency and intensity of flares or be, they are like owners, the Lords of the Volcano. 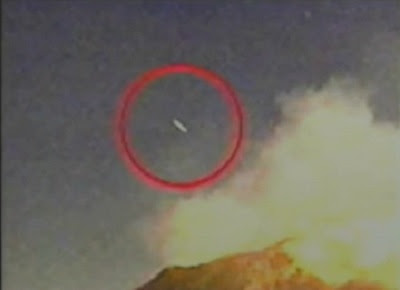 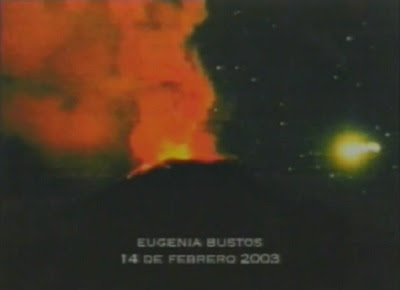