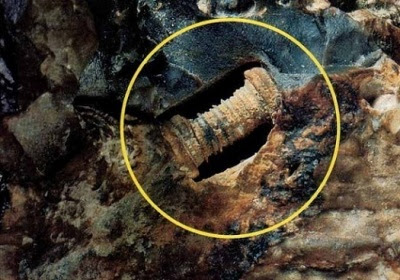 The reel in an ancient rock: an anachronistic vision.

RUSSIA. In 2009 (?), the LAI (Laboratory of Alternate History) received a letter with photos very interesting. The author of the photographs was Alex Gobulev. In the images obtained near the town of Serpukhov Sarakseevo the outskirts of Moscow - a stone that did seem to have a normal aspect, terrain, but containing, encrusted at its core, a screw.

The stone, originally much larger, was extracted and fragmented to be used in constructions of the village. A research group of the an institution - a private and independent NGO - the International Research Center for Cosmic Research of Russia or simply Kosmopoisk (chaired by aerospace engineer Vadim A. Chernobrov) which at the time was investigating the alleged fall of a meteorite in the region, near the city of Kaluga, was called to examine the discovery.

The first avaliation, indicated that the rock was very old and in one of the pieces, realy, was incrusted a small object, with the size of few more of one centimeter. It was surprisingly similar to a screw or a coil of metal. And there was another object in other fragment of rock, a reel. It was an anachronistic vision. 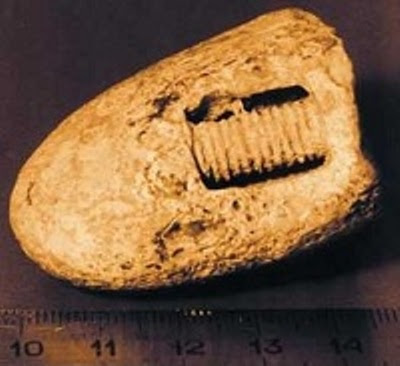 The stone with the screw and several other fragments of the same material were delivered to a specialist Paleontological Institute. In the analysis, dozens of scientists from various areas analyzed the material. And there were also other foreign objects that were revealed fossilized through exposure to X-ray.

The stone with the screw and several other fragments of the same material were delivered to a Paleontological Institute. In the analysis, dozens of scientists from various areas analyzed the material. And there were also other strange fossilized objects that were revealed through exposure to X-ray. Like the reel... 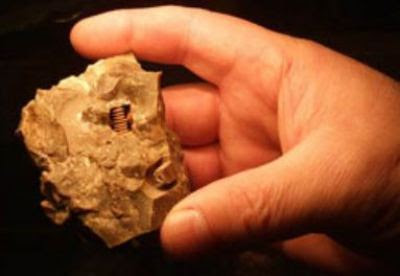 The details increase to the mystery: the "screw" and reel are clearly deposited or placed (contained) in empty cavities. The process of fossilization has not filled the void surrounding. The spaces that containing them, have are well-delineated and, in the case of the reel, is possible see its rounded ends.

The lithology (geological science of rocks) determined the age of the original block rocky. Between 300 and 320 million years ago. Around the screw, there was deposits of other materials, which were identified as fossilized remains of marine organisms belonging to an ancient geological period, extremely indented: are crinoids, called Lilies of Sea. This reinforces and confirms the datation of the rocks. The finding became then something inexplicable.

The crinoids are echinoderms that are not move by themselves (but link themselves to a base and, while are free, they follow the movement of the waters being driven by marine currents). Ifor when they find "a port", being rock or wood, their bodies adhere to this fixed base.

The crinoids have their soft tissues sustained by a structure stiff, made of calcium carbonate: an endoskeleton. In the process of fossilization these soft tissues decompose leaving only the solid material that - often - resemble themselves to artificial objects like gears in a machine. That would explain how the artifacts were isolated in capsules: because, for a time they were protected by the organic matter of the crinoids.

However, the screw and the reel - both - jammed into the rock, isolated in their capsules could not be confused with the fossils of organisms because of their anatomy: they are very well delineated. These objects, in no way are similar to the crinoids.

The origin of this news was a survey on a website in Spanish language (see Sources). However, this editor found little and went hunt the original, according to the editor of the Spanish blog the source would be a Russian magazine called Ogonek But, Spanish blog, not released the URL of this magazine (but should have disclosed. Hell ...). This source was not found. We only found a OGONEK.NET - in german language.

Advanced search in the website OGONEK.NET - using key words indicated above did not result in any reference. Then, we use the key words in russian and the news was found (in the source indicated below and in others - all them in russian language).

There were several illustrations and at least one contradiction to what was published in the Spanish blog. The ENIGMAS E MISTERIOS website informs that the discovery took place in 1996. But the Russian website, clearly, mentions 2009. 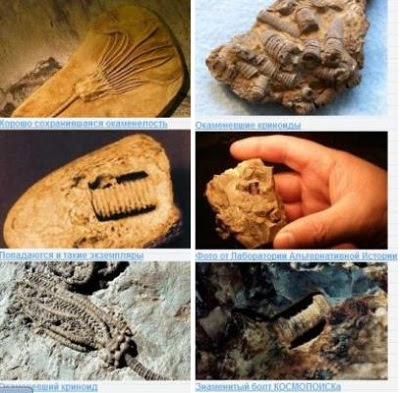 To find the a correct date we seek a reference page of the research group Kosmopoisk in English and Russian, in Wikipedia. In these sources, we find the record of a series of expeditions conducted in October 1996 in Kaluga (in subtitle Korenevo).

That year, the team Kosmopois was at this region - Kaluga - to investigate what would have been the fall of a meteorite. They were called, according to the russian website, to examine the rock that contained the anachronistic objects found. Then, the group collected the samples that were later analyzed.

The editor of Brazil Weird News wants to make clear that, with this kind of journalism without no one criterion for the accuracy of information, which does not disclose its sources (the case of the spanish website), it is difficult to share, in fact -the knowledge. We consider this kind of omission one amateurism unthinkable for a professional journalist.

But this news is being published here, with as much detail obtained because no doubt it is a piece in nothing negligible for a collection of fortean events. Ie Charles Fort would have cut the page of the newspaper and filed it in his collection. Thus, we made the same. The difference is that, nowadays, a collection like this can be public. BWN shares with you.

This editor remember, even, that this news has an obvious connection with another news, here published - a one which caused much controversy and even scorn from other editors and readers for the BWN BLOG: Machine dated at 400 million years found in Russia.

The source, an Italian website that also omitted any mention of its source but the same scientist of the other news appears, in this news - Alex Gobulev, as the person who would have made the first records of the finding.

Finally, we advise that on entering the Russian website page, our machine is immediately disconnected from the internet. Damn, coincidence or page contaminated? We do not know. But here is the record of the fact. We save the Russian text and the images captured by a tool, no download. This editor has much appreciation for your PC, so I hesitate to go there again. This business of Russian page which disconnects the network is very unpleasant ...