The monster of Billings Dam 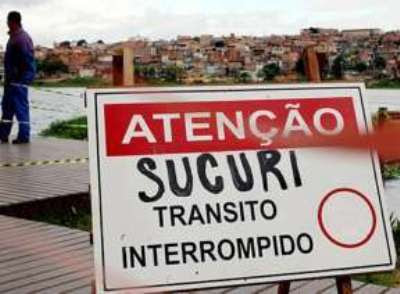 São Paulo state – In the metropolitan area of Grajau, Parque Residencial Lagos (Residential Park Lakes), on the banks of the Billings reservoir a snake more than 5 meters in length is scaring the 1,2 thousands of families living on site. The monster, an "Anaconda", better known in English as "Anaconda"(probably a Eunectes murinus) is considered one of the largest and most robust amid all snakes in the world.
For now, she only managed to attack animals from small to medium size, such as capybaras, chickens and ducks, but nothing prevents that she can to capture a human being, especially the smaller, such as children and adolescents.
President of the Association of Friends of the Park, Mrs. Vera Lucia baseline, 61 years (in 2011) account: This is a monster. It sticks his head out of the water and then, dives, lifting gigantic tail. Even a dog, she eaten. In the main pier of the park, a plate that was placed warns – Danger: Anaconda. Herself Basali identified the animal: I was born in Mato Grosso. This snake appears there only in the Amazon ... (but this is the anaconda pilgrim of Grajaú ...).
For unknown reasons, far from its original environment, the Anaconda found a home in Billings Dam and nobody knows how the animal got there. Amid the mystery surrounding the origin of the creature, have appeared different versions of its presence in the area.
The tongue of the people puts the blame on an unidentified Japanese. He would have taken the snake to Grajaú and began to create it. Finally, he decided to put it in the pond. The time of appearance of the snake in the water is also controversial: the majority says that it appeared about 20 days but Mrs. Janet Marques da Silva, 53, says: There is talk on this snake since 2003. Mrs. Silva believes that the snake has even some offspring: Ten, at least, the oldest to have about ten years now.
The young marketer Elanes Santos Moreira, 16, was almost a victim of the monster. Even alerted he gone to fish in the Dam. He reports: Suddenly, it appeared, put his head above water. I felt blood to fled of my face.
Mrs. Basali even tells that tried to photograph the creature but complains of fatigue, because of the vigil, day and night. Still not got the picture and describe: She's too ugly. His head has the size of a ball handball. Informed, the firemen were on standby to try to capture the animal. But the beast is unpredictable and only with a patient ambush, will can surprise the creature. Let us follow the case and await a flagrant photo of the monster of the Billings Reservoir.
SOURCE: SAMPAIO, Paulo. Grajaú tem também seu monstro do lago Ness.
IN Estadão/SP, published in 05/01/2011
[http://www.estadao.com.br/estadaodehoje/20110501/not_imp713261,0.php]