The bloody tree of Colombia 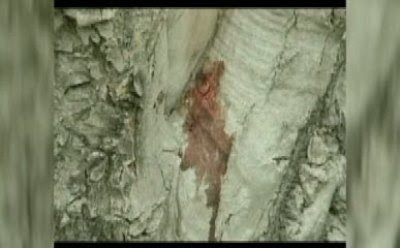 Link video: spanish. The dwellers claim
that the tree cries and cries blood. In
the video, witnesses assure that the
substance exuded has healing properties.
COLOMBIA – On Friday, April 16 (2011), in the early morning hours, in the neighborhood of the Media Luna (the Colombian city is not mentioned in the article!) some children, while were playing, they noted a tree in which, in one part of the trunk, seemed sprout blood. One of the children, ran to tell their parents, but they didn't gave atention. However, as the children insisted, the parents of some of them went to the site to check.
Soon the news spread and a festival of men, women, children, people on foot and motorcycle, crowded the place to see the phenomenon. A neighborhood resident, Mrs. Maristella P. Barreto, said that in the beginning, the trunk just dripped, exuded (a substance the color of blood) but with each passing hour, the liquid was taking the form of a man, with open arms. She concluded: It is Jesus Christ!
Zoraida Perez, 80 years believes that in the Christian Easter season, these epiphanies often happen. In this same time the evil temptations also become more numerous and the figure in the tree is a miracle inviting us to renew the Christian faith. The peasant, Santander Manjarrez, explained that the tree, known locally as "árbol de carreto" has a dense wood, heavy, without resin or internal cavities. He does not understand how the tree can secrete any fluid.
SOURCE: Revuelo por árbol que sangra.
IN Taringa, published in 04/25/2011.
[http://tarinbot.net/noticias/75402/descubren-rbol-que-llora-sangre-lo-que-falta-taringa.html]