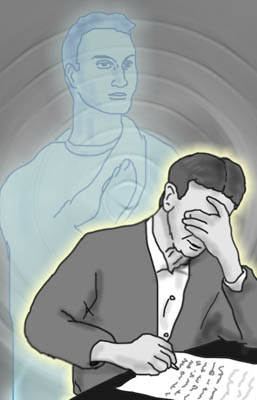 ITAPOÃ CITY, Rio Grande do Sul ─ In July, 2003, the notary Ercy da Silva Cardoso was murdered with shots of fire gun. Leandro Rocha Almeida and Iara Marques Barcelos, [woman], were charged of the crime. In 2006, They were tried separately. For him the veredict was culprit. She was considered innocent. A letter psychographed acquited Iara.
However, the prosecution appealed and a retrial was scheduled. This another trial happened this month, in november 11 [2009]. However, the new retrial confirmed the sentence. She is innocent. The letter was validated as evidence.
This letter was psychographed at a Center of Spiritism - Sociedade Beneficente Espírita Amor e Luz - and four lines were fundamental in influencing the jury. The message that, testemonies say, was dictated by the spirit of Mr. Ercy Cardoso da Silva confirms: that Mrs. Iara is innocent. The spirit refers to her like a female friend and says he is saddened by the injustice that she is suffering. The desincarnated was praying. He had faith and he was sure that truth will prevail.
Leandro Rocha Almeida, who worked for the victim and was sentenced to 15 years and six months in prison also confirmed the innocence of women.
Source: Carta psicografada volta aos tribunais
In Zero Hora ─ published in 11/11/2009
[http://ultimainstancia.uol.com.br/noticia/JUSTICA+MANTEM+ABSOLVICAO+DE+ACUSADA+QUE+APRESENTOU+CARTA+PSICOGRAFADA+AO+JURI_66612.shtml]