MEXICO. The Communion Wafer That Bleeds 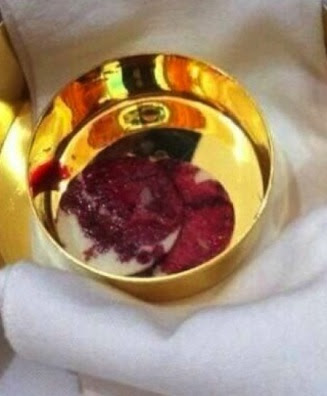 MEXICO, STATE OF JALISCO. CITY OF GUADALAJARA (the state capital). Wednesday, July 24, 2012. In the parish Maria Madre de la Iglesia, colônia Jardines de la Paz, the priest José Dolores Castellanos Gudiño - known as priest Lolo - revealed a transcendental experience: being in prayer, he listened a voice that instructed him to communicate a divine message to the community .

In the words of the priest, the voice told him: My dear apostle Dolores, today is a great day. The bells must ring for for call those that will come from all corners. I will pour out blessings for those who will be present.

A blessing would have been manifested immediately, in a Eucharistic miracle:  when he opened the shrine (where communion wafers are stored), was there - inside the goblet of Consecration, a communion wafer dipped in a dark red liquid.

As had been determined by divine command, the priest announced the fact. Of course,  quickly, the faithfuls  began to say that the liquid is the blood of the Christ, Jesus. 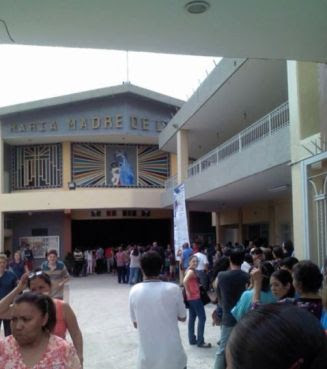 But still in the Wednesday (24/07/2013), when chalice and communion wafer were placed in sight of the believers, the tumult in the interior of the temple was inevitable and demanded the intervention of police and religious leaders (above).

Always cautious with all the called miraculous occurrences related to Christianity Roman Catholic, the Mexican representatives of the Church of the Vatican, or the Archdiocese of Guadalajara, on Thursday (25/07/2013), promoted the celebration of Mass, at noon.  The temple stood  filled.

While this,  the chalice with the communion wafer were removed from public display and duly forwarded for analysis. The case also has been duly registered according local legal proceedings.

Before stating any miracle is needed make examinations to determine if the red liquid is, in fact, hematic - blood and if is human blood. This is the first step to science and religion can confirm or reject the miraculous nature (supernatural or divine) event. 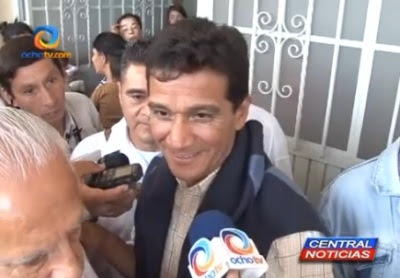 IMAGE: YOUTUBE - HOSTIA SANGRANTE, OCHO-TV
POSTED EM 26/JULY/2013
[http://youtu.be/V7TKlJ2lQHo]
Wanted by the midia, priest Lolo was not found. (Another classic measure of the Church of Vatican in its strategy of discretion around alleged miracles). Another priest explained that "Lolo" was not in the the parish, but was working on other activities.

After Mass on Thursday (25/07/2013), the church of Madre María de la Iglesia was closed to the public, leaving open only the Chapel and Atrium. Also the sacristy and office of the church were closed too. Was only allowed entry of journalists publishing Semanário. Outside, many reporters and onlookers crowded the place in search of news about "the communion wafer that bleeds".

The Archdiocese of Guadalajara issued a statement in which says that Archbishop J. Francisco Robles Ortega, acquainted with the case, asked the monsignor Ramiro Valdés, Vicar General of that Diocese, to follow the investigations until they reach a conclusive result, no mistakes. The statement also highlights ... It is not impossible that Jesus manifestes up this way ...