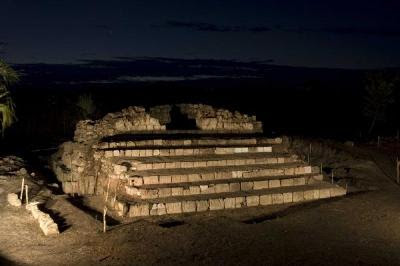 MEXICO – In the archaeological site of El Palmar, southeast of Campeche, a staircase of hieroglyphs was discovered by researchers at the National Institute of Anthropology and History (INAH) associated with the University of Arizona and to Mexican National Autonomous University (UNAM). Preliminary analyses have indicated that this pre-Hispanic city was in contact with the cities of Calakmul (Mexico) and Copan, Honduras. The finding has a thousand and three hundred years.
This is not the only staircase carved, decorated with hieroglyphics found in the lowland Maya. Twenty of this kind were cataloged. Evidence of the monument were first found in 2009 among others, which are called Grupo de Guzman. At the time, the evaluation of the stones "in situ" suggested the existence of a stairway.
The field season began in late 2010 and early 2011. According to archaeologists, Javier Lopez and Camacho Kenichiro Tsukamoto, the first four pieces examined, were in good condition, while two others were fragmented. It was necessary to do emergency procedures for conservation.
All blocks, drawings, and specific location of the find were photographed and examined with instruments like a topografic laser, before being transferred to archaeological camp with safety. The INAH's restorers: Yareli Jaida and Diana Leticia Jiménez Arano determined the level of conservation and are working in restoration of the blocks. 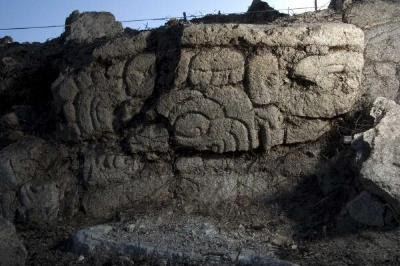 Hieróglifos
A preliminary translation of hieroglyphics, led by epigraphist Octavio Olguin Esparza (UNAM) provides important information for understanding the Maya Classic period (250-900 AD). The hieroglyphic stairway relates, among other historical events, the visits by foreign to El Palmar. The events are marked in a calendar. The date shown is "11 Ajaw Sak 18" or 13 September of 725 AD. The stone document also refers to the 'Lords of place' and the contacts they had with cities such as Copan and Calakmul, in the southern of the region that was occupied by ancient mayas. 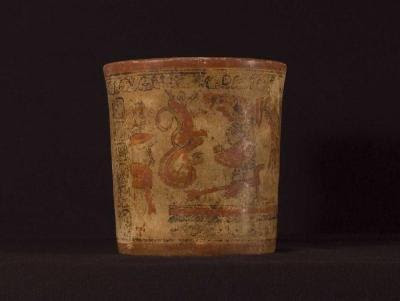 During the excavations, was discovered a large room whose floor shows signs of having been burned, which indicates the possibility of perform of rituals. There were also fragments of pottery. A funerary instalation with offerings was also found. There were human bones and two objects of polychrome pottery. The anthropologist Jessica Cerezo-Roman, University of Arizona determined that the mortal remains belong to a mature man, as indicated the examination of the jaws and the inlays of jade on the front teeth.
SOURCE: Descubren escalinata con jeroglíficos mayas.
IN Artículo 7, published in 04/25/2011
[http://a7.com.mx/cultura/arqueologia/7105-descubren-escalinata-con-jeroglificos-mayas.html]