The Invasion of the Big Worms in Laguna Madre 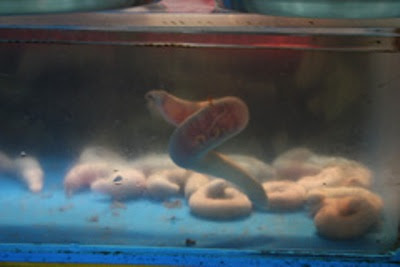 Specimens collected for exam. The worms - which are reproducing themselves rapidly, are unknown to the local citizens, the fishers that work in the Laguna and biologists. They have between 20 and 30 cm long. They stink and cling to human skin causing severe irritation.

MEXICO. In the city of Vitória, state of Tamaluipas, fishermen working in the Laguna Madre requested the support of biologists Centro Regional de Investigacion Pesquera (Regional Center of Fishery Research), the SAGARPA (Secretary of Agriculture Livestock Rural Development Fishery and Food) and of the state government to help them control a plague of unknown marine worms that is spreading in fishing waters.

Besides to be a strange life form in the ecosystem, the worms produce a nauseating odor and irritate the skin of who comes into contact with them.

At the site, no one never seen these big worms that have been captured by fishing nets installed in the coastal of the various villages of the saline lake - that is Laguna Madre.

Fuentes explained: The plague is spreading throughout Laguna. That has not yet affected (apparently) the quantity and quality of shrimp but is affecting fishermen. It is a parasite that clings to human skin and cause much irritation.

The animals have a length between 20 and 30 cm and are covered by a sort of mucosa. They appeared there two months (amid July and August, 2012) and are multiplying rapidly.

The authorities and especially the Regional Center of Fishery Research are mobilized in order to study the specie to determine the degree of danger these creatures may to represent to health of persons (besides the skin irritation, what is already enough to be a problem) and of the fishes, considering that the fishery product is destinated to human feed.