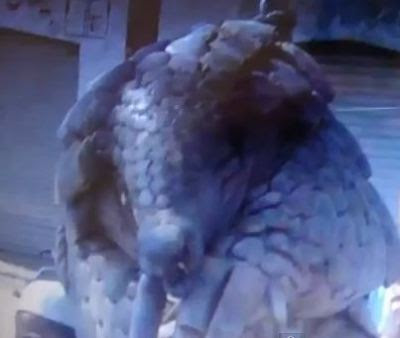 PAKISTAN. News about sighting and / or capture of strange creatures have appeared frequently in all midia. Often, it is just about some kind of rare animal or something like a large dog or wolf, bald and squalid that is immediately identified with chupacabras. But...

In August (2012) - in Swabi district, the fourth most populous of the province of Khyber Pakhtunkhwa - Pakistan, an animal was captured and killed by the citizens. The images were posted on Youtube where bizarre headlines and titles refer to the creature as "an alien"m an extraterrestrial. Occurs that, in true it is very earthly, or better, subterraneous.

Many netizens, between irony and contempt, expressed their vast wisdom identifying the animal as a pangolin. Moreover, most commentators - "experts" - say that the unusual size of the individual that appears in the images is "obviously" a photographic trick that consists in a simple approaching of the object in front of the camera, a matter of perpectiva.

Also remembered was that pangolins are endangered and that the conduct of Pakistanis ...was an act of brutal ignorance.

The pangolins, whose name derives from the term pangulang, meaning "convolves by self same" - despite the wide body covered with hard scales and made ​​of keratin, of the sharp front claws that give it a reptilian appearence, are toothless mammals.

Related with the anteaters, they use their long and sticky tongue - that reaches the middle of the chest for collect ants in their holes, food of most species. There, too - the arboreal pangolins, that climb trees and eat other insects, especially termites, whose nests are under the bark of the trunks. 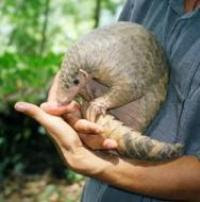 Their different species are found in India (Manis crassicaudata), including regions of Pakistan - where the species usually have a size 33-45 cm long. At China and also at Africa, where different species live at a wide area stretching from downtown to the south of the continent. Among these, the giant pangolin.

The Giant Pangolin is common in Uganda, Tanzania and Kenya. Its gigantism can be defined - in terms of measures - between 1.30 and 1.40 m long, between the males - from nose to tail and a specimen of this type weighs about 33 kg. 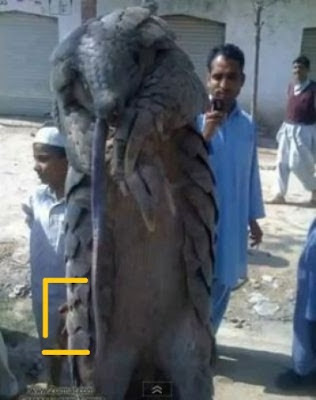 The majority of netizens, says the size displayed - in the image of Pakistan, is the result of a trick of perspective. The matter could be closed. The pangolin is a harmless creature, toothless and is threatened of be extinct. The video is a fake. End point. However, certain details of the images and news asks a more careful analysis.

However, the same image has a benchmark that excludes that theory. One can clearly see two fingers of the boy next to the animal; the fingers of a normal human hand and this gives an idea of the real size of the animal. Is possible to see too, the feet of three person near the animal. Normal feet.

This reference point indicates that this pangolin, really is a giant pangolin. But the common Giant Pangolin, natural of Africa, larger than the Asian pangolins, are minor of the creature in the photo, even for the more well-endowed, the greaters among individuals of their species.

At Pakistan, this animal that can be seen in the photo, this type of pangolin - is well known and considered a monster. There, is called Gorgakh (or in Urdu قبر کھودنےوالا - spoken idom at Pakistan, grave digger in English) and - about this being, the pakistanis say that eats freshly buried corpses, digging up their graves, violating the coffins.

Despite its reputation to be a harmless insectivorous, similar to the anteaters, phylogenetically, the pangolins are closer to the carnivores. That would explain why an animal that usually eats ants and termites would be interested in newly buried corpses. 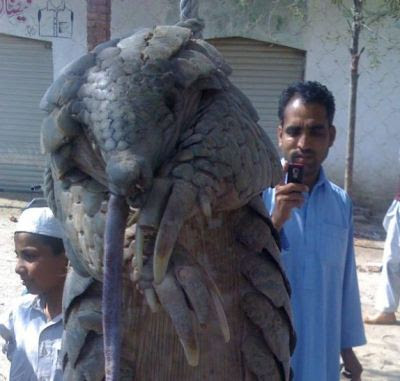 In this another photo (above), more complete - in the top - and expanded with quality, another element of comparison appears to certify the veracity of unusual size of this pangolin: while the previous photo (full body) can be seen the fingers of the boy, holding a stick, walking beside the Gorgakh here can be noted:

1. what appears to be a human arm with a bracelet, on the wrist, that seems to be surrounding the thorax region of the animal beneath the limb or claw, on the right and which can best be seen with the applying of a greater contrast in the image with decreased brightness;

2. especially, a thick rope, above the head of the monster that appears to be tied to the neck of the animal, holding him.

This, without to mention the what seems to be a ring in its nose that was observed bysome netizens.

See photo in super enlarged in SIASAT, website of Pakistan [http://www.siasat.pk/forum/showthread.php?129017-Monster-killed-in-Swabi-district - KPK] - The subtitle says: It was found and killed here in our village Swabi...

In the more complete photo of the SIASAT is possible to see - too, a long appendix on the left that end in an arrow-shaped. It is the tongue of Gorgakh, much major in lenght than in pangolins known.

From the analysis, is possible to conclude that this Pakistani pangolin, is indeed a Gorgakh, or be - a gravedigger, the meaning of the local expression. A gravedigger in reverse, that violates graves instead of closes them. 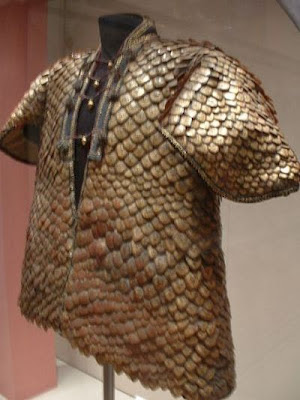 A breastplate or armor with shoulder pads made ​​with scales of Pangolin. The object, uncommon, was gifted to the King George III (1760-1820), monarch of the United Kingdom, Great Britain and Ireland (from 1801) - by Francis Rawdon, 1º Marquis of Hasti.

The piece is from Rajasthan - today the largest state of India. Apparently, this not gave much luck to the king, he died that year. Photo: Gaius Cornelius, 2006. On display at the Royal Armouries, Leeds - England, UK.

At China, where the pangolins are not monstrous, and still are all insectivores, they are hunted for use in the preparation of special foods. Moreover, its scaly leather is used in the manufacture of garments, and in earlier times, a breastplate of pangolin's leather was an excellent vest anti-blows of knives. Perhaps even today, could refrain the impact of a small caliber bullet.

Regarding the gigantism of this pakistani pangolin, if the analysis of the photos - made here, and the testimonies of the inhabitants of the local where it and others like it are known and are found, if this has some value, the question is: why this pangolin is so greater? Not even the species of the called "giant pangolin" has a comparable size. Moreover, this giant species has its habitat in Africa, far away from Pakistan.

Besides to be really a giant pangolin, this creature developed an anomalous feed habit for their species, accentuating their carnivore aspect, since it became a predator of fresh human corpses, which obtain its nourishment from corpses, tearing the flesh with its claws to ingest the portions in pieces. Despite the lack of teeth, a pagolin is able to swallow and digest ants. Likewise can digest the meat of the corpses.

The Pakistani tradition, which even has a special name for the creature relating it to their funerary diet, indicates that the people of that country already has some familiarity with this strange kind of pangolin. In current terms, a tradition need not - necessarily, to have hundreds of years. Already there are postmodern myths. Some ocurrences, if are dated from the decades of 1960 or 1970 can to be considered traditions.

Considering that Pakistan is one of the few countries of the world recognized like holders of atomic energy technology aimed at making weapons; that the radioactive waste from various sources is often discarded in subterraneous dumps that - no guarantees that are actually sealed properly, and - even, considering that not all accidents with reactors are disclosed to the public knowledge, it would not be absurd to think in Gorgakh as a mutant resulting from contamination by high levels of radiation. Or - worse, a creature genetically modified, in laboratory - of which offspring could have been - inadvertently, liberated in nature or to have escaped to the control of scientists.