The mystic face of Brasilia 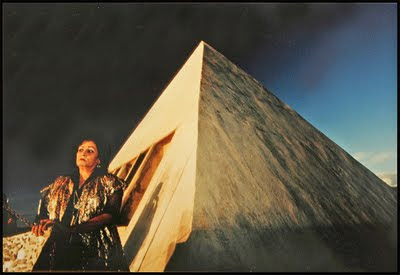 "Tia Neiva" at Sunrise Valley
Neiva Chaves Zelaya, widow, truck driver, believed to be the reincarnation of Cleópatra and Nefertit., In the years of 1960, she founded, in Brasília, brazilian capital, The called Vale do Amanhecer [Sunrise Valley], a kind of religious center that mixes espiritism, christianism, africans cults, mayas, spartans, gypsies and even the Moais traditions of the Easter Island. Born in "Propriá" in the state of Sergipe, "Tia Neiva" died in 1985 at age of 60, leaving a legion of followers and a son in leadership of dozens of temples around the country.
An esoteric aura hovers over Brasilia long before its foundation. In the nineteen century, one profecy of the Catholic priest Don Bosco would have predicted the construction of the city between paralelos 15 and 20. Don Bosco had dreamed with the city.
The town, planned, has the shape of a plane whose base lines are two lines that cross, a cross in herself. The architecture of Oscar Niemeyer is, until today, incredibly futuristic. Planato located in central Brazil, the monuments in the landscape of savannah seem mirages. Yuri Gagarin, Russian astronaut, the first man to orbit in outer space, when was visiting Brasilia, said that he was felt there like if had arrived in another planet.
Exist around of 2.500 mystical places there, in the city and in neighboring zones. One of this places is the Eclectic City, which has existed since 1956 in the city of Santo Antonio do Descoberto at Goiás state. Its founder, an aviator, was a spiritualist medium.
The exotic religions and sects of the central Brazil are are almost all characterized by syncretism. At the" Vale do Amanhecer" this syncretism is evident. The christian cross, The Davi star of the jews, crescent moon of the muslims, images of entities of the African pantheon, pyramid. These symbols can all be together in the same sanctuary.
The "Vale do Amanhecer" is a district located between Brasília and Planaltina, one of the satellite cities of the federal capital. There are around of 15 thousands of inhabitants in this kind of urban island of esotericism.
The men, that are called "Jaguares" (Jaguars), wear clothes like robes and capes of brown color. The capes are covered of signs. They seem like vampires of the hinterlands. Women are called nymphs and wear multicolored tunics. Among this colors, two predominate: yelow, representing wisdom and the purple, that simbolizes the cure. Women also use accessories: a spear and flower arrangements on head: a kind of wreath.
Among the spiritual lines of thinking practised at The "Vale do Amanhecer", the called "Mesa Evangélica", has a great number of adepts. In this group, spiritualists mediums are seen practing their ritual gestures, snapping his fingers, making passes, a kind of gestual signs code that usually serves to purify people. The masters and the adepts are ever repeating the phrase: Obatala, I give this moment one another sheep to Your herd.
Domingos Pereira, who lives in the neighborhood for 35 years, explains: We are intermediaries between Heaven and this land. We are working with energy. We want to save the humankind of the social tragedy. We want to calm the vengeful, the impregnated with hatred for save the world of the darkness. On a metaphysical level, the master of the religion of "Tia Neiva" is the Indian "Seta Branca" (White Arrow ).
The reincarnation idea is the center of doctrine. Joaquim Antonio, painter of walls, walking in the dark corridors of the Temple, gives his testimony: I have had 19 incarnations. At last, I was a plantation owner who did many evil things. I came back to redeem my debts. For this I arrived in this situation, incarnated on this planet. Because the Earth is a place of atoning, a planet of transition.
SOURCE: BERTOLLO, Rodrigo. Misticismo de Brasília cria doutrina de pirâmides, espíritos e roupas coloridas.
IN 24Horas News - UOL Notícias ̶ published in 04/20/2010
[http://www.24horasnews.com.br/index.php?mat=326063]