The Man of The Hole 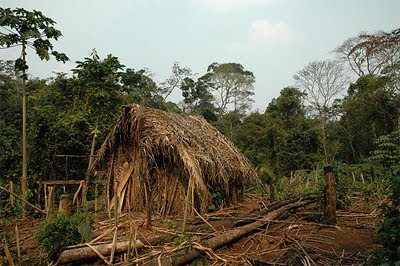 This is the guard post of FUNAI. Possibly, the the holes of the native man are better off. Let's Meditate ...
AMAZONAS ─ The support organization for indigenous people, Survival Intrenational, reported in this wednesday, december 8, that an indian has been suffered repeated attacks by armed men.
According the Survival International, this indian is known like ''The Man of The Hole'', cause he digs holes to capture animals and for hide himself. His tribe, wich name is unknown was massacred in the decades of 1970 and 1980. The director of the Survival international, Stepen Corry: His tribe was massacred in the past. Now, The Man of The Hole is facing the same problem.
The post of the florestal guard was looted, informed functionaries of the Funai - [National Indian Fundation ─ Fundação Nacional do Índio]. Shotgun cartridges were found at the local. Police suspect that the criminals are in the service of local ranchers who covet the lands of the Man of The Hole.
Source: Último sobrevivente de tribo é atacado na Amazônia, diz ONG
IN O Globo ─ published in 12/10/2009
[http://oglobo.globo.com/mundo/mat/2009/12/10/ultimo-sobrevivente-de-tribo-atacado-na-amazonia-diz-ong-915135239.asp]