CHILE. The demon of Porma's cliff 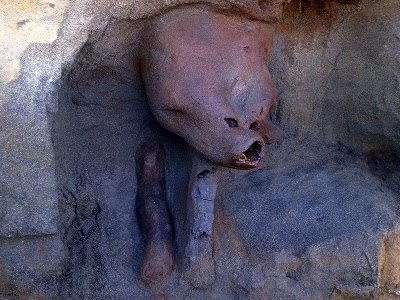 CHILE. In the Province of Cautín, Araucanía Region, commune Teodoro Schmidt - there, at Porma's Beach (located 12 kilometers from the city of Hualpín), was discovered by tourists, ingrown on the namesake cliff - the strange figure of something that seems to represent a chimery, humanoid and animal.

On January 28 (2014), a resident of the neighborhoods who declined to be identified, was spot on with his family when his daughter noticed the formation, similar to a fish's mouth. Curious, the girl used a small shovel to scrape around the formation.

Like an archaeologist. She  wanted to see the rest of the figure. In that location of the cliff, the stone is covered by a thick layer of clay mixed with sand. (Or be, sedimentary rock). 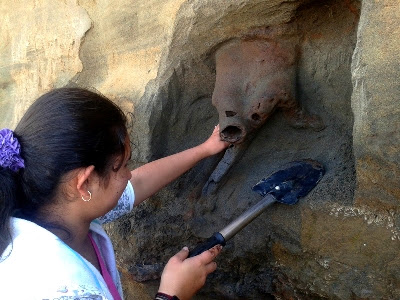 Then, it was revealed what appears to be the head and the front of the body of a  monster. It seems to be delineated or made with the  clay of the site but,  in a state of ceramic.

The finding soon attracted attention and many beach goers have made ​​photos. About  the nature of the object, some feel that the thing is just a freak of nature. Others believe that the sculpture or fossil may be the representation of an alien being (a being strange, unknown). 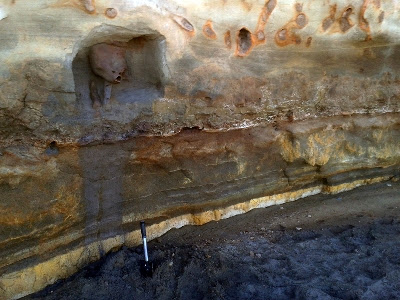 More than the deformed face of the creature is possible see two legs with animal-like appearance, with hooves. Fossil, sculpture or natural phenomenon, the figure 'rescued -  undoubtedly has a demonic appearance:  the demon of Pormas's cliff.

Given the eccentricity of the formation, the newspaper El Periodico, after sending his team to document the facts, contacted experts - as geologists - able to  determine the nature of the finding.