Holy Spirit. A dove of light on head of Pope Francisco 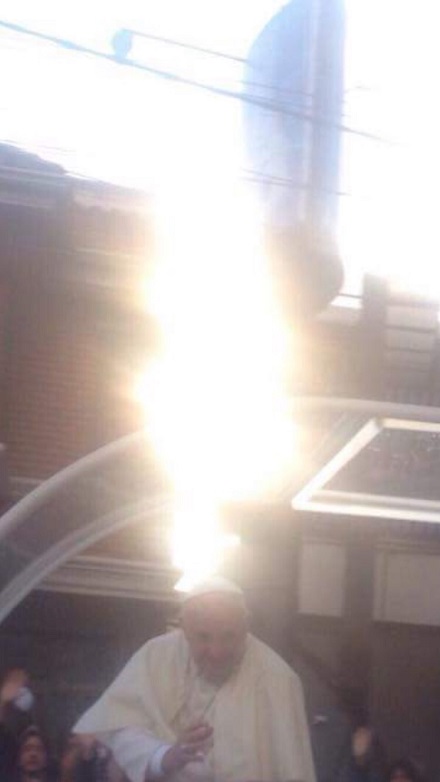 A photograph among many those were taken along the travel of Pope Francis in Paraguay, one of them draws attention.

In the image, a dove that looks like a being made of supernatural light. Resting on the head of the Pontiff, the 'entity seems came from heaven in  a huge beam of light energy.

PARAGUAY. The Pope Francisco visit to Paraguay was a historic event. He arrived on Friday, July 10 -  and ended his agenda in the country on the afternoon of sunday, July 12, 2015. This is the second visit of a Pope to  Paraguay in the History of the country.

The Bishop of Rome attended a dozen events in public and private visits. He met civil and religious authorities (the Catholic Church), the diplomatic corps, representatives of different sectors of civil society, young people and residents of the poorer areas of the capital (city of Asuncion).

But the image that stays from this passage of the 'Pontifex at Paraguay is the supernatural picture of a bright dove - that seems come from heaven wrapped in a huge dense luminous fog - on the head of Francisco.

The PrimiciasYa newspaper (from Argentina) talked the phenomenon with parapsychologist Alexander Morgan who commented: It is the light of the Holy Spirit descending upon the Pope. It is a dove on his head. He is protected by the Lord ...

But, always will exist those who will speculate something different and with some reason. What light is that? Optical phenomenon explored by midia? Holy Spirit? Wonders of the apocalyptic Antichrist?