Cenotes - The sacred Wells of the Mayans 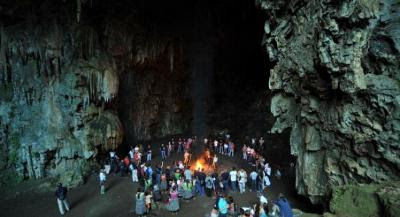 MEXICO/GUATEMALA. In Yucatan, in underground caves there are many wells called cenotes. In this places someone can fell the surviving of a mystic aura that crossed 14,000 years of history of the Maya.

Considered sacred places, in these caves and waters are made millenar rituals. These caves are also sacred to archaeologists.

Even today, these places are protected, not only by the INAH (National Institute of Anthropology and History) as well, by the descendants of that mysterious people who - until today, performs ceremonies in these caves and cenotes where they make offerings to ancient deities and entities: the Lords of the waters and of the fields.


CENOTES - WHAT THEY ARE 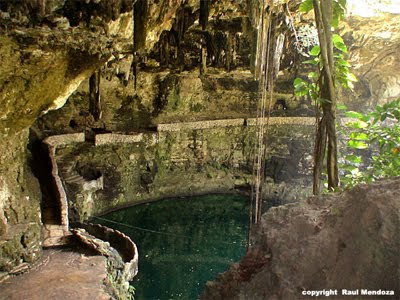 A cenote located in Belize, country at the northeastern coast of Central America

The cenotes, of different sizes, are formations like wells. They are natural pools, fountains. The term "cenote" -  is a  word  compound of three ideias - TS - ono - OT.

Together, this concepts refer,  among the mayans , to natural water fountains, wells. Cenotes are cavities of limestone rocks - more or less deep. How were formed during periods of low sea level - in many cenotes, the water is salty.CENOTES.


This is a video of researchers in one of the pools of Belize. The images show a diver approaching a crater. He disappears into a cloud of sand that rises from the depths of the waters. When the video reaches about 3 min and 40 s, appears the rescue of part of a huge human femur.


For the ancient Maya, the underground caves that contain cenotes were inhabited by gods. The spanish catholic religious - Fray Diego de Landa, who was archbishop of the Archdiocese of Yucatán between 1572 and 1579 - claimed that the gods of the underworld have inhabited these caves.

Even archaeologists must respect the traditions to study these sites. Are released to enter only after going through a ceremony conducted by a wise man, a priest. The ritual includes the reciting of  prayers and spells (from mayan tradition) - during all the night. In the morning, is made ​​the sacrifice of an animal, usually a turkey or a chicken.

These priests do not allow to any person enter the cenotes. According to their beliefs, the gods, owners of these caves and wells - they can punish, severely,  the violation of their property. Who dares enter the lakes without the ceremonies and permissions may get sick, or worse, may be captured and disappear, can be abduced - forever, into  the waters's mysteries.