The Radioactive and Explosive Stones That Come From Sea 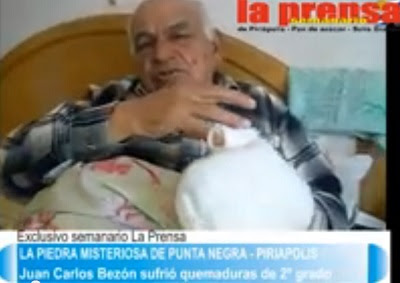 Juan Carlos Bézon, 78 years (in 2013) in exclusive interview for the weekly La Prensa.
Piedra misteriosa en Piriápolis
Entrevista IN YOUTUBE, Posted in 19/JUNE/2013
[http://youtu.be/6mCV4urIBhI]
URUGUAI. At Piriapolis city, in Punta Negra's beach, the retired military, fisherman in his spare time, 78 years - Juan Carlos Bézon, was walking on the seaside when he noticed a small stone, just over 3 inches wide. He noted that it had a strong color in a fluorescent green hue, flecked with dark spots, brownish.

He picked up the object. It had a rough texture - and placed it in his pants pocket. In about five minutes, the man began to feel a warming sensation in the thigh.

It was the stone that - apparently - started a spontaneous reaction, radiating heat. Immediately Bézon began to undress and, luckily, as was wearing two pairs of pants, apart from underwear, escaped a more serious injury in the leg.

However, he could not avoid second-degree burns, severe in one hand and small lesions in the other. And before anyone could observe the strange material, the thing - simply exploded, disintegrating itself.

The remains of the victim's clothing were sent to Montevideo (country's capital) where will be submitted to scientific expertise. Given these facts, the authorities of Piriapolis city have determined a careful patrolling of coastal area in search of similar objects. 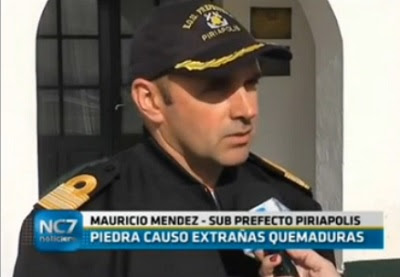 A netizen - identified as arompani2007 -  after watching a one version of the video about the case posted in YOUTUBE, commented, two weeks ago (from 07/02/2013) - remembering that this isn't an isolated case:

TRANSLATION: My wife is doctor here in Chile and told me that once, she had a patient with who had happened the same thing and the wounds still remain without never heal completely. Effectively there are radioactive waste that are coming (at the beaches) of Pirianopolis (Uruguay) deposited there by the tides. 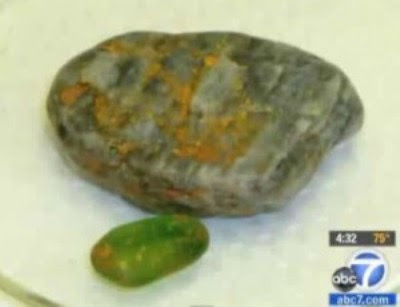 Indeed, is not the first time that this kind of strange incident occurs. Stones that go into thermal ignition on contact with the human body, even when protected by clothing have appeared in some beachs of the world.

And in these cases, of these strange boulders that burn and explode, the material was collected, always, on beaches - in the sands near the sea. In 2012, an episode in California-USA, made ​​international headlines (see below the Related Link).