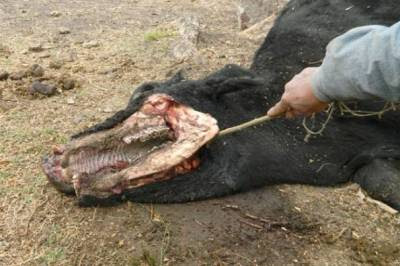 ARGENTINA. There are more than a month, mysterious deaths animal deaths with mutilations and extraction of organs have been taking place in different rural areas of Argentina as departments in the fields of Victoria, Colonia Yeruá, Viale and Villaguay - all located in the province of Entre Rios. The cuts are precise and cauterized. The cases come by multiplying since the second week of July (2012).

The researcher Simondini Andrea Perez, of the organization Visão Ovni (www.visionovni.com.ar) - commented: Veterinarians who analyzed the cases didn't found a natural explanation for the injuries.

On July 15 (2012), a horse was found dead with strange wounds on his chin. The animal appeared to have been killed on the spot where he was found. There was no trace or traces of blood in the area around or in the animal body. In the abdominal area were noted signs of natural predators, who acted in the post mortem but the cuts that produced death, were extremely accurate.

These cuts were observed in the head, where he was made ​​a semicircular incision exposing the bones of the snout in the region of the lower jaw. The ear was completely removed, as the eyes, tongue and reproductive organs. The animal owner was not identified.

Owners of a lodging near where this mammal was found - Posada de la Lechuza - identified as Mrs. Rocio and Juan, testified has saw the horse while was dying. In the days that followed, the couple, Rocio and Juan saw ...a strong and broad light, very intense orange-red near the lagoon... (del Pescado).

Meanwhile, multiply the sightings of strange lights in the sky of Argentina

Simondini Andrea Perez informs that: Since late July and early August, we (the organization Visão UFO) received dozens of complaints. In 2002, an outbreak of such mutilations occurred in the central province of La Pampa. Now, the phenomenon moved, concentrating in the province of Entre Rios.

In Lucas Norte, a city also located in the province of Entre Rios, recently, between the last week of July and early August (2012) were recorded at least three cases of cattle mutilation. The animals had the skin of the head carefully removed with a precision of a scalpel. In one of the cows, the tongue was extracted from the root and surrounding tissue was intact.

The animals were found just 50 meters from the farmhouse whose location, the owner prefers hold in secret, fearing harassment of UFO researchers and other experts. Two of the cases occurred on August 04 (2012).

In these cases, the victims were animals were with signs of poor health, were skinny. The farm was facing a problem: the pastures were drying. At first glance, the farmer thought that the killings were the work of cattle rustlers but the hypothesis was discarded because the best cuts of the animals were not removed. 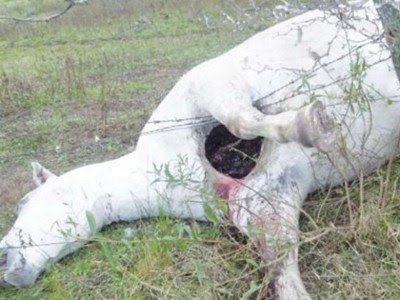 Another case occurred in Nogoyá also municipality of the province of Entre Rios where a horse was found dead with heart and genital organs extracted.

The horse had a hole with a diameter of 35 cm on the chest between the two front legs and the other hole in the rear, from which, were extracted the genitals  (image above). Again, the signs of bleeding were minimal in the local and in the animal's body.

Another similar complaint appeared in June (2012) presented by a cattle breeder in the area of ​​Crucecita, distant about 50 km from the city of Nogoyá. There were several mutilated animals. 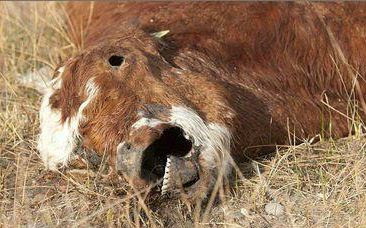 In the vicinity of the city of Viedma, Río Negro province - Department of Adolfo Alsina, Argentina - a calf that was found dead with perfect cuts in the head and other injuries on the body like the perfect extraction of the eyeballs. Were also extirpated salivary glands and tongue. In the same region, similar cases occurred in 2003 and 2005.

Given these numerous cases of mutilated animals, the rumors about the presence of chupacabras (cattle suckers) in the region has intensified. The chupacabra is a cryptic creature, a myth, a legend.

However, the precision and regularity of the cuts in the organs makes think in the action of the unknown predator but that is an intelligent agent and not an animal using claws and fangs to wound their victims.

As regards the opinion of government health authorities, the hypothesis of the action of chupacabras or aliens must be dismissed as mere popular fancy.

According to the official experts, their tests indicate that the lesions found were perpetrated after the death of the animals, which would explain the absence of significant bleeding and those responsible would be natural predators such as foxes and field mice. (Interestingly, the birds of prey or birds of rapine are not mentioned in the reports of health workers and government's veterinary).