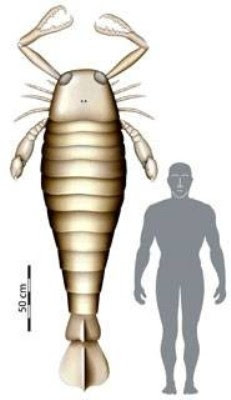 Paleontology – Analyses performed on the fossil of a giant scorpion 417 million years old, a species extinct (thank goodness!) revealed traces of a substance called chitin in the exoskeleton of the creature. This finding demonstrates something that until now was considered impossible: The age of the chitin found, is several hundred million years older than what was considered the maximum possible in terms of conservation of this material.
The discovery was made ​​by a team of scientists led by George Cody of the Carnegie Institution of Washington. Analyses were conducted at the ALS (Advanced Light Source) at Lawrence Berkeley National Laboratory in California
The work of these experts contradicts the classical idea that the organic material can not be mantained for so long because it would be decomposed by microorganisms. However, scientists have found a fibrous mesh of chitin in the fóssil. Chitin is a polysaccharide rich in nitrogen.
Some species of these huge animals had reached over two meters in length. Chitin was also found in younger fossils, like a scorpion 310 million of years and even others, with 25 million years. The size of the giants scorpions is a frightening demonstration that in the past, arachnids, insects, crustaceans and other creatures were much larger than today. It is known that Eurypterids are aquatic ancestors (and extinct) of land scorpions and possibly of all arachnids of today.
SORCE: Detectan vestigios de quitina en el fósil de un aterrador escorpión gigante.
IN NCYT, published in 04/11/2011
[http://noticiasdelaciencia.com/not/862/detectan_vestigios_de_quitina_en_el_fosil_de_un_aterrador_escorpion_gigante/]