The bizarre baby of Dominican Republic 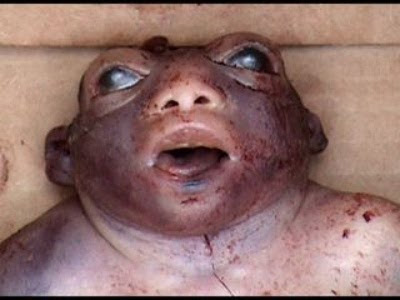 DOMINICAN REPUBLIC – In the touristic town of La Romana, in the afternoon of a monday – april 14 (2011), in Hospital de Saúde Pública Francisco Gonzalvo (public Health Hospital), a woman from Haiti, identified like Tossent Luis, 20 years of age, gave birth to a bizarre baby.

The child had a human body but her face was like a frog face. The mother, when looked the litlle girl, was taken of terror and left the hospital, running. Nobody knows to where she gone.


The news spread. Many people moved by morbid curiosity gone to the hospital hoping to see the abnormality. Were not allowed to view the child. As is common in such cases, the child died after half an hour after birthing.


This case resembles another episode occurred at Nepal in 2006. The breakingnews said: Bizarre baby born. The text is reproduced below:

Charikot, Dolakha, March 29 - The birth of a bizarre-looking baby in Charikot, the headquarters of Dolakha district, on Wednesday, drew a huge number of onlookers to witness the astonishing sight.


The neck-less baby with its head almost totally sunk into the upper part of the body and with extraordinarily large eyeballs literally popping out of the eye-sockets, was born to Nir Bahadur Karki and Suntali Karki at the Gaurishnkar Hospital in Charikot.


The Karki couple is a permanent resident of Dolakha’s Bhirkot VDC. The bizarre baby, however, died after half an hour of its birth, Suntali, the mother, informed. It was taken to the hospital after its death.


The news about such a baby being brought to the hospital spread like wildfire and there were hundreds gathered at the hospital to have a look. The police had to be deployed to control the crowd.


“We wouldn’t have been able to save it, even if it had been brought here alive, said a nurse attending to the mother at the hospital. This is an extremely abnormal case.

The “baby” weighed 2kg at birth and was born after the normal nine-month gestation period. Suntali, already a mother of two normal daughters, was not suffering from any illness during the pregnancy.


Nir Bahadur, the father, says he does not feel any remorse for the newly-born baby’s death. “I am happy that nothing happened to my wife, he said.