Atafona: the city being swallowed by the sea 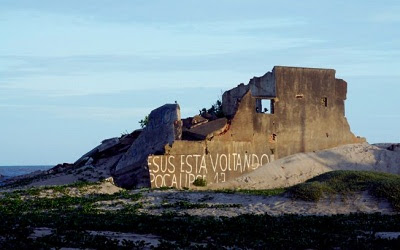 
The sea advance over the place is been monitored since the 1970s. Streets houses, hotels, entire blocks are gone. The Atlantic Avenue, a classic landscape of coastal cities, no longer exists. In a radius of five kilometers of coast, erosion has turned everything in ruins. The water takes the sand creating dunes that occupy the space stolen to men. 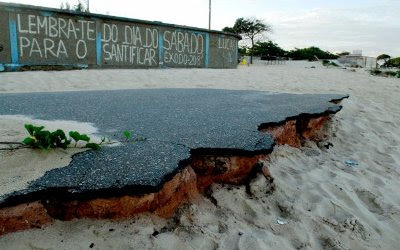 The advisor to the Planning and Environmental Management of the municipality of Sao Joao da Barra, Andre Pinto explains:

The first observations of erosion were made 40 years ago. The problem was intensified by the lack of pressure of the water volume of the Paraiba do Sul River, which crosses the town towards the sea. The strong dynamics of ocean currents, the geological formation and for being a point of tension of the winds from the northeast, beyond the construction irregular in the fringes of the river and the sea, all of this aspects contribute to make the ocurrence of this phenomenon so intense in Atafona.
The city of São João da Barra has 30 thousands inhabitans and a territory of 432 km². The main economic activity in the region has always been fishing. But 'tourism of the ruins' has grown from in recent years.


The oldest inhabitants say that, since the 70's, the sea surged over five streets, totaling about 500 homes. This is equivalent, by the calculations of the prefecture, 40 soccer fields. Long ago, the sea became prohibited for swimming due to the presence of rebar and constructions debris hidden under the muddy waters.