Sacred caves of Yanomamis are found in brazilian Amazonian 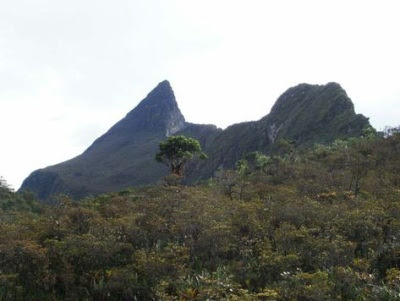 Neblina peak, located on the north
of Amazonas state, in Serra do Imeri
(Imeri mountais) is the more high
point of Brazil with 2993,78 meters.

AMAZONAS/BR – An inedit expedition realized last year (2010) in the Parque Nacional do Pico da Neblina (National Park of Neblina Peak) identified five caves that are considered sacred by the indigenous of the yanomami ethnic group.
The caves are located at the high river Negro (rio Negro). So far, only the Yanomami knew their location. Now, the caves were indexed by governamental instances that organized the expedition: the Centro Nacional de Conservação e Pesquisas de Cavernas (Cecav) linked to the Instituto Chico Mendes de Conservação da Biodiversidade (ICMBio – Chico Mendes Institute of conservation and research of caves).
The exact localization and photos obtained of the caves will be not disclosed. This is a secret because these caves are not only geographical spaces. For the Yanomami indigenous the five caves are mystic, magical places with spiritual meanings.
Despite the caution, a little information could be revealed by the coordinator of the expedition, José Carlos Reino. The caves are small but sustain a rich ecosystem. Granite predominates in geological formations and the researchers explored an extension of 60 km.
But beyond topographical knowledge the project includes cultural anthropology that related to the caves. During the expedition were recorded the legends and myths of the five caves, traditions of the Yanomami indigenous people.
To reach the caves, the expedition had to negotiate with the Yanomami. The Indians themselves have led the team to the site but they do not agree to allow visits in that area of the the National Park. Before the group begin the expedition, the leader indigenous Joaquin Figueroa performed a ritual (damn, the caciques no more have names of caciques) for the spirits, that live in the caves, permit the presence of strangers there.