The Photographs of an Invisible Reality 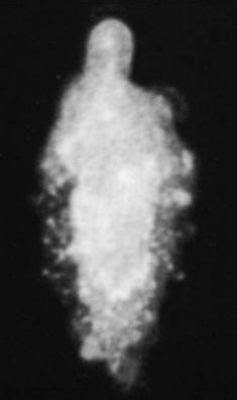 Madonna of Novokhopersk. A plasm-Being. A one of the so-called  ̶  Superiors. Hopper Expedition (Хопёр), at the Voronezh region. The photograph was taken using a film capable of capturing the ultraviolet light spectrum.
[IMAGE: http://www.silanov.ru/index.php?option=com_content&task=view&id=14&Itemid=5]

Genrikh Silanov (Генрих Силанов), director (now retired) of the Geophysical Laboratory of Voronezh (Russia), began his studies about metaphysical phenomena in 1967, especially interested in UFOs. Throughout their investigations, in the lack of instruments suitable for registers and analysis, he created a device able to shoot what he himself defined as "Fields of Memory." Using this equipment, Silanov led numerous research and expeditions since 1978.

This technology uses special photographic materials capable of capture a wide spectral range electromagnetic frequences like those that reach amid 190 and 800 nm (nanometers, a unit of measurement for electromagnetic waves as well as visible light, ultraviolet and infrared radiation, gamma radiation) which allows the perception in that that goes beyond to the visible light.

The research continued in subsequent years, searching objective evidences of the metaphysical reality of different paranormal phenomena. Records that may be considered as capturing images of ghosts, because these images show beings, objects and situations that happened, existed for a long time or exist today but that aren't perceived by naked eye.

The result are are impressive documents of the past of the and invisible reality that - for the conventional science would be completely lost or unknown because no type of memory until then, it could restore the vision of its occurrences.

The equipment developed by Silanov team is able to capture scenes from past wars, the presence of UFOs, aliens, poltergeists, foo fighters (bright orange balls - strange objects that were seen by pilots, following their aircrafts especially during the Second World War) or even the memory of archaic human creatures, extinct ancestors of modern man that disappeared there are millennia...

The Plasma Beings & the Plasmoids Formations

This technology allowed to the researchers to observe a reality that exists in parallel to the reality experienced normally by the people. One of the first weird things observed and photographed in this "parallel world" was a kind of cold plasma clot and living that seems to manifest a mental behavior, a configuration that contains a kind of information.

These "entities", regarded as an entirely new form of intelligent life, they were called of the plasm-beings. The Plasma beings may be confused with plasmoids formations but are different phenomena.

The plasmic formations, are only concentrations of ionized molecules, they aren't life forms. However, its existence indicates a critical stress state of the electromagnetic field and its formation is a reactionof the Earth - Gaia while an organism, whose main function is to restore the balance upset by the critical stress that can occur in magnetic fields.

Among the Plasma Beings, there are those to whose, Salinov refers like the supremes or superiors. In the mountains of the Pamir / Tajikistan (map above), Borisoglebsk, Novochpersk, Semiluki, the evidences and records of the presence of superiors are abundant...

The purpose of the Superiors in visit this World or dimension of human existence, would be - for the scientist, teaching people how to evolve in their life cycles on this planet. By this motive, throughout history, his appearances have been associated with deities and instructors able to make miracles or to give instructions to the human race, like occured, many times, in the apparitions of the Virgin Mary... READ MORE