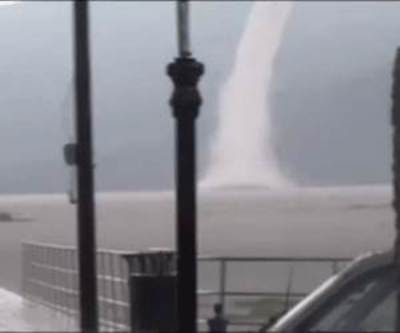 MEXICO. At the vicinity the city of Leon, in the state of Guanajuato, a huge waterspout emerged from Yuriria lagoon, on Saturday afternoon - July 20 (2013).

The phenomenon, natural, popularly called "water snake, surprised the inhabitants of the region. Numerous people recorded the event using the cameras of their mobile phones.

Five decades already passed since the last time that a waterspout like this was saw at that place. This time, the training remained in the air for 35 minutes, beginning at 7:30 pm.

A waterspout has similar characteristics to tornado because both phenomena are associated with a strong wind moving itself in a  upward spiral that was formed, in this case, on the surface of lagoon's waters.