The remains of a spanish ship: The most ancient shipwreck of Brazil 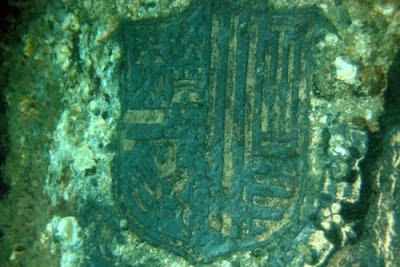 The stone plate found on the ship refers to the period in which Spain and Portugal formed one kingdom.
IMAGE: O Dia
[http://odia.ig.com.br/portal/brasil/naufr%C3%A1gio-de-navio-espanhol-em-santa-catarina-%C3%A9-o-mais-antigo-do-brasil-1.413711]
BRAZIL. Archaeologists and divers who discovered - in the coast of the state of Santa Catarina - fragments that were identified like part of a Spanish ship. The remains that are of a shipwreck occurred in 1583 are the oldest ever heard in Brazil. The first object was found - only recently, in 2005 when finally was possible to rescue some pieces to the surface.

After a new historical research, was proved that the ship is Spanish and was sunk in the 16th century, according sources of Efe press agency and the NGO Projeto Barra Sul and the University of Southern Santa Catarina (Universidade do Sul de Santa Catarina - Unisul), responsible for the discovery.

The research revealed that parts of the ship obtained by the operation belonged to a fleet that sailed from Spain in 1581 with the aim to build two forts on the Straits of Magellan (Magalhaes strait) - natural passage between the Atlantic and Pacific oceans - to contain the spread of pirates British territories that threatened the possession of America. Historical documents allowed to determine the epoch of the accident on January 7, 1583.
Researchers said that even in April will be possible to remove all material deposited in a shoal - wich has of three meters in length and find the rest of the nave. Divers of the Projeto Barra Sul (Bar South Project), that work the coast of Santa Catarina - they discovered - so far, three another shipwrecks and all of them ocurred in the 16th century.
The first part rescued from of the ship is a stone plate that depicts the design of two lions and two castles and a portuguese symbol in the middle of the composition. This shield refers to the kingdoms of Castilla y Leon (Leão & Castela). It is a reference to the period of Iberian Union, when the kingdoms of Spain and Portugal were united between 1580 and 1640. For the archaeologists, the stone should have to be made to be placed at the entrance of a fortress.
Researchers also rescued a triangular plate, dated 1582, named after the then king of Spain, Felipe II. According to experts, the object would be an official symbol that the navigators and explorers did put in the new lands as a mark of the propriety in the territories. This served to say for possible invaders what european nation had been the first to arrive at the region and - for this, owner kingdom of the place according the laws.
In March, in new underwater expeditions, divers will attempt to retrieve a cannon, ceramics, stones ballast and bullets of different calibers. In the 16th century, the coast of Santa Catarina had not yet been colonized by Portugal and, really, was a different route from the Spanish expeditions conducted in 1525 by Rodrigo de Acuña, who left 17 of her crew on the island of Santa Catarina, Florianópolis (today, the capital of the state) a village that was founded later at the place.
The director of the project, Gabriel Correa said: This place was strategic but was also a critical, dangerous point. Here was located last port for the arrive to European navigators bound for Rio de la Plata and Strait of Magellan. However, was need much care to navigate on this waters because the seabed is rough, treacherous and full of banks shifting sands.
SOURCE: Naufrágio de navio espanhol em SC é o mais antigo do Brasil
Terra, published in 29/02/2012