Strange Apparition In The Rain Forest

Porto Velho ─ Rondônia: A video posted in Youtube this month [october, 6 2009] shows two guys at Porto Velho Rondonia state capital. they were enjoying themselves in a stream [a igarapé]. A third boy, who was recording the scene saw something pass behind his mates, between the trees. This something appears twice on the images. This something appears twice on the images. At first, only the filmaker saw the thing moving in the bush; a second time, an another guy perceived the moving too. Scared, he gone out running and screaming. What was that? A shadow, an animal, a being enchanted forest? Nobody will ever know. 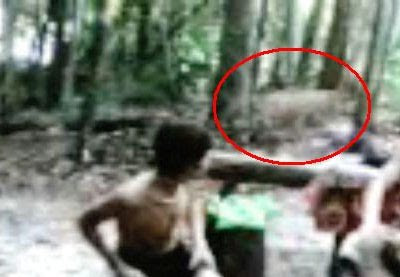