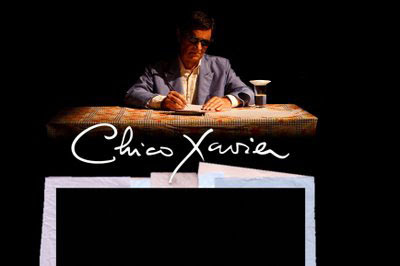 Recordings of the Chico Xavier ─ The Movie, were marked by a supernatural atmosphere. Chico Xavier [1910-2002] was a spirit medium known and most prestigious in Brazil and in the world. Xavier psycographed more than 40 books and his name is a reference in the Spiritualism literature in portuguese language. Renata Imbriani, actress of the film, adept of Alan Kardec's spiritism, tells that, in certains scenes, the medium was really close to the protagonist, the actor Nelson Xavier.
I was waiting for my turn to go on stage and Nelson was recording. Suddenly, I saw an open door. A strong light went out through the opening. It was Chico. He supported the right arm of the Nelson and was all the time energizing him. The amazing thing is that when he touches the Nelson, he, Nelson, seemed to take the features of Chico ─ said Miss Imbriani. In another scene, which reproduced a spiritualist meeting, an extra, a woman, incorporated an entity. The director, Daniel Filho, remember: We stopped filming and waited the lady reset, back to herself.
The actor Nelson Xavier, himself commented: I felt his presence all the time. He was the single personage that I asked to do, and today, I believe in everything he said and lived. Every time I think of him I am very touched. The movie should be released on April 2, 2010, when Chico would have completed 100 years of life.
Source: DE PAULA, Patricia. Mistérios durante as gravações do filme sobre a vida de Chico Xavier
In Extra-Globo Online ─ publicado em 27/09/2009
[http://extra.globo.com/lazer/materias/2009/09/27/misterios-durante-as-gravacoes-do-filme-sobre-vida-de-chico-xavier-767800542.asp]