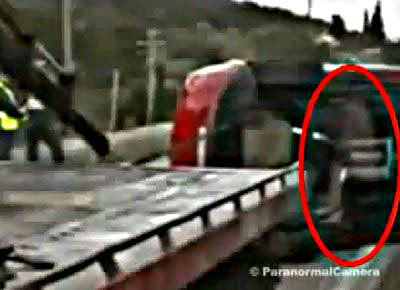 ABOVE: A frozen image with contrast enhancement and color applied for highlight the spectrum.
YOUTUBE, posted on 10/12/2012.
LOOK [http://youtu.be/8JuqV9PEojs]

SPAIN. This happened in the first fortnight of December 2012. A car accident at a road of central Spain. One person, a man died - and two others victims were injured.

Within minutes, the habitual movement was established at the place. Came the transit authorities (road police), the perimeter was isolated. The press,arrived.  Journalists - of a local TV news - began their work: filming the scene and  interviewing people. Of course, lots of pictures were taken at the crash site.

Returning to the TV station, the team of the reportage, in edition island, making the reviewing the images to edit the news, they noticed something unusual: a figure, the specter of a transparent man walking in the site of the tragedy. This "ghostly humanoid thing" moves itself, almost slides in front of the camera.

The video - edited - a sequence very short, 37 seconds - was posted on YouTube where it was copied, reproduced, and in the epoch of event, only in Spain, has been seen by over two million people. The controversy arose between three opinions:

1. is a trick of image. The video is a fake.
2. It is a reflection in the glass of the camera lens itself.
3. The video is genuine and, indeed - is a registry of a disembodied spirit of a man,  probally, the man who died in the accident.

Many people who commented this video, the question or doubt about its veracity argue that the "ghost" is dressed and that it seems (to them) obvious that "souls" desincarnated should not use not  clothes because clothes are material artifacts  that don't make part of a soul.

However, these people do not know that, according the theory of the Spiritist Doctrine, immediatily after leaving the body, especially in unexpected circumstances, the spirits still maintaining their physical appearance, including clothes because they still believe, they think - still be incarnates. In Spiritual Dimension of the Existence, ALL APPEARANCES are reflecting - objectively - the thoughts of the Spirit.