Djins Have Caused Outbreak of Fires in Egypt 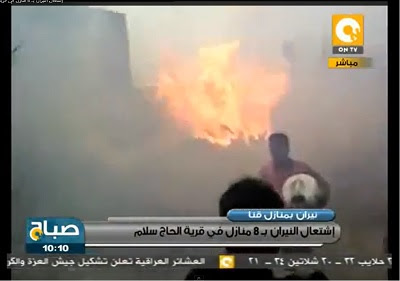 Flames devouring homes and buildings in the district of Nag Saleni: The evil of the Djins.

EGYPT. At Qena province (or Kaine) *, in the rural zone and nearby the town of Farshout - in a place called Hag Saleni ** - (Upper Egypt, south of the country), since the begin of April, residents are frightened with an outbreak of fires seemingly inexplicable.

* Kaine during the Greco-Roman period, and - before that, in antiquity, Cainepolis.

** The name of the town, "Hag Saleni" (phonetically, the pronounce) - was obtained by crossing data of dictionaries of translation with the audio from one of the TV reportages of an Egyptian channel  (at 11 seconds of the sequence) - which is  covering the events. Below the YOUTUBE link to this reportage.

Many people, the tongue of the folk - have commented that the episodes are the work of supernatural forces; spirits: the djinns, supernatural entities considered, in general, malign.

In addition to the fires, that have arise in rural areas, having already, wounded - at least, two farmers and killing tens of farm animals - only this month (April) 67 homes have burned in the flames (until 27/04/2013,  more that two per day/month - Shorouk NEWS, published 27/04/2013). Even now,  the Civil Defense - don't got point the cause of the incidents.

In this situation, people aren't calling, only, the firefighters. They are urging for the aid of God!, seeking the Mosques to make an especially Prayer (which the name is translated in english like Zoom, a word meaning an approaching to God or Allah) and a rogation for the djinn (or djinns) stay "calm" or be controlled.

In one of the sources of this news, the AL WATAN VOICE, the online edition of 01/05/2013 (timezone) - this source gives an idea of the environment in which these fires are happening. 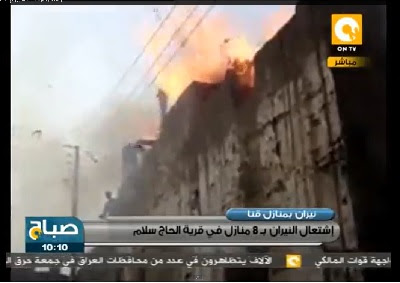 Reporting by an egyptian TV channel about the fires in at the region of Hag Saleni.

In another reportage, is possible to perceive that the city of Farshout and the "district", "metropolitan area" - the "neighborhood" of Hag Saleni aren't only dusty and precarious fields of the Middle East underdeveloped like some of the translated texts can to make imagine. And the fires are happening both in the old buildings - in the the narrow shady streets of the city - as in the Nag Saleni fields.

After all, in this urban "neighborhood", residential rural villages are housed kings. Yes, indeed, these djinn are attacking the neighborhood of the local aristocracy.

The governor of Qena, Major General Adel Labib established a scientific committee of professors from South Valley University (South Valley) to investigate the causes of fires.

The Researchers concluded that the accumulation of large amounts of canes and straw, a material extremely dry in this season - inside the homes and on the roofs, in the terraces of the houses - very common in the region -  have entered into natural combustion due to high temperatures of a merciless sun. That is, the material had suffered a self-ignite.

But the people rejects the diagnosis of this report and insists that those who are responsible, that really are causing the fires are the djinns (demons, goblins).

THIS TEXT IN PORTUGUESE
[http://sofadasala-noticias.blogspot.com.br/2013/04/djins-provocam-multiplos-incendios-no.html]