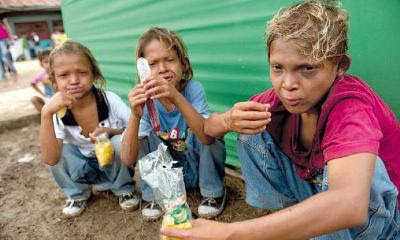 PERU. In the city of Pucallpa, (the capital of the Ucayali region, the Coronel Portillo province), three brothers - Samuel, Jesus and George (above), suffer from a rare genetic condition called ectodermia (Syndrome Christ-Siemens-Touraine or Hypohidrotic ectodermal dysplasia) that forces them to remain in the water to prevent skin damage and even death.


One dangerous characteristic of this "anomaly" or "difference" (genetics), is that the boys do not have sweat glands (or, if or when, the carriers of this ill they have these organs - they are atrophied - they aren't functionals. They do not sweat and therefore must be kept at temperatures below 20 º C (Celsius).

In this condition, living in a region where the temperatures easily reach 30 ° C, to survive,  the boys need to be wet every ten minutes.

To attend school, is required the aid of buckets of water that are placed next to each of them to maintain the body moisture which they do not produce. One of the functions of the perspiration is help the metabolism to mantain the organism fresh; maintain body temperature. (RPP, 2013)

Also, not sweating, the boys are deprived of an important agent removing toxins harmful to the body: the perspiration, the sweating.

In Pucallpa, are known as the boys-fish. Olivia Oré, mother of the children, tells: My baby cried a lot and I do not know why but, when watering her head, he slept.

The three boys of different ages, suffer from the same ailment. When will wander at earth, in free air,  mother has to carry containers with water to keep them fresh. The couple (his father is Olympian Oré) have has two other daughters who do not have the anomaly, because it only is transmitted to males.

The disclosure of the case mobilized the authorities in the region, specifically the Defensoría Municipal del Niño y Adolescente (DEMUNA) of Pucallpa, that provided all support to children. The boys were taken to the country capital, Lima, where, at the Instituto Nacional de Salud del Niño, may receive more appropriate care.

The representative DEMUNA reports that ... They had no identification (documents) then we provide the paperwork for them to have access to health insurance Integral. The doctors said the brothers need specialized treatment. 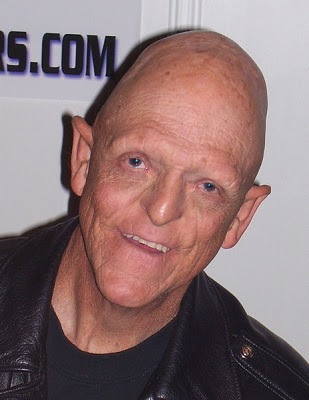 The American actor, Michael John Berryman (1948 ...) is carrier the Hypohidrotic ectodermal dysplasia. He developed a career in movies and television usually in horror and science fiction films, such as Star Trek: The Next Generation, The X-Files and A Cuckoo's Nest or One Flew over the Cuckoo's Nest (1975).
[http://en.wikipedia.org/wiki/Michael_Berryman]

The ectodermia produces malformations in the skin, such as fish scales and the carriers of this mutation need keep themselves in constant contact with water to survive. The main symptoms of this condition are absence of sweating, hair loss and malformations of the teeth, which are small and sharp.