The Satyr of El Salvador 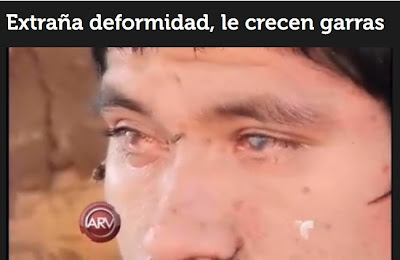 SAN SALVADOR. Identified only as Joseph, 19 years (in 2013) - living in a village (canton) remote, extremely poor, near the city of Ilobasco (Department of Cabañas) - he suffers from an abnormality in epidermal tissue that causes the rising of lumps with an appearance of bones.

Some of these formations seem horns, others - claws, thick spines but especially your hands and feet have developed themselves like misshapen hooves and sore. José became unable to walk.

It's one of those strange cases these genetic puzzles. Like the disease that gave fame, in 2008, to Dede Koswara, fisherman of Bandung. He stood known as the Tree-Man of Indonesia.

The scientific name of dysfunction or "skin disorder" is epidermodysplasia verruciformis (also called Lewandowsky-Lutz's dysplasia). It is an extremely rare, inherited and characterized by a dysregulation in the metabolism of the skin caused by a sensitivity (and subsequent reaction) to the human papillomavirus (HPV).

At worst, within the normal level, this is the virus that causes warts. Because the disease is rare, the virus is not. When contário, is very common. They are found in about 80 percent of humanity manifesting as asymptomatic infections.

The epidermodysplasia verruciformis is a mutation which "disables" the HP genes on chromosome 17 of the human code. There is no cure or effective treatment that can to control the the manifestation of the mutant gene.

All it can do is use drugs inhibitors disorder, some - actually, with positive results - as the interferons, the retinoids, able to, eventually eradicate, yes, the uncomfortable and painful excrescences.

In severe cases, when the mutant dermal formations have already taken the patient's body, the only alternative is surgery, to remove the abnormal tissue. (This was the case of the Indonesian Tree Man).

The phenomenon brings to mind the mysteries of human genetics ideal formula, the invisible intelligence of the biochemistry governing these bodies of skin, flesh, blood and bones; makes think in infinitely complex equation of logic governing the experiments, sometimes cruel of the Nature an of the Destiny.

An equation still not acessible for human Knowledge. In the case of Joseph, of El Salvador, the social drama that greatly aggravates the situation is recurrent in the world. It is evident. It's very poor people with no hope of access to necessary medical care to alleviate the suffering of the guy and his mother. 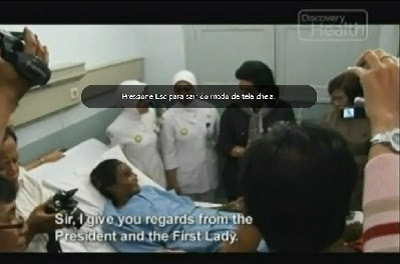 Only "Tree Man: the most watched at internet"
by kissesboy
IN [http://youtu.be/Pl4JQufOzPY]


IMAGE ABOVE. Television program Beyond Ordinary (something like ... Out of Joint) - Discovery Health. A representative of the government of Indonesia says: Sir,I bring recommendations of the President and the First Lady. The goverment took notice of you. Whatever your needs, we'll take care of you.

To the Tree-Man, Dede Koswara, disclosure of the case in electronic media, television and Internet, was salvation. Calling the attention of the world with pictures and testimonials, on video posted in YouTube, the indonesian obtained the assistance of a north-american dermatologist at the University of Maryland - School of Medicine in Baltimore - Anthony Gaspari (image below) - who applied medication and did the first surgery in 2008. 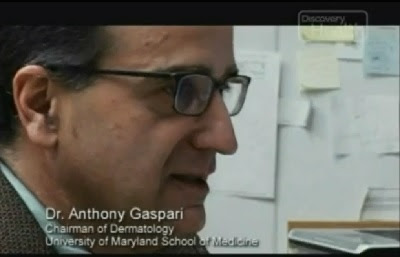 The dermatologist Anthony Gaspari . He saw the case in a TV documentary and stood interested. He went to Indonesia. Visited Dede Koswara the his humble residence of the patient where samples of tissue were harvested for examination, in order to establish the diagnosis and treatment line.

According diagnosis, Dede Koswara requires two surgical procedures per year as part of their treatment, the base drug is vitamin A and its derivatives (retinoic). The treatment is necessarily continuous because the disease has control, but it is costly and simply invisible oe irrelevant in its rarity bizarre for public health managers. 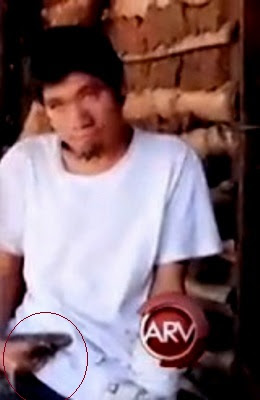 For the Salvadoran known only by first names - Joseph of ... El Salvador, perhaps the single path of access to the Brave World Miracle of Human Medicine is the same of Tree-Man ..

Expose himself in TV programs, blogs and other niches of mass communication, that often listed cases like this among the topics of entertainment, that there include extreme bizarre.

Then, maybe - exist a hope for José because he can be the next man ... bizarre mutant. After all, its excrescences have their own personality. José could never be the new Man-Tree. He is the man of Hooves and Horns.

Unlike the indonesian man, that already shows resourcefulness in dealing with journalists, surrounded by family - Joseph of El Salvador is a young man whose peculiar condition prejudiou and harms their development as a whole. 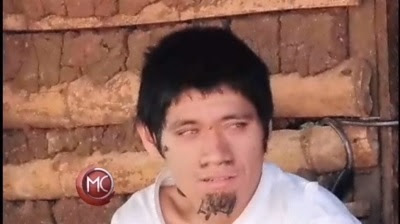 In the neighborhood where he lives is an aberration that causes laughter or tears of those who look him. Rejected, lives almost isolated in the hut. Only he and his mother - she, visibly tired - thinks that the case of the her son can be a work of witchcraft. Infantile in its 19 years (in 2013), it is loaded in the back by his mother because his feet have become an unviable pain and no functional.

They don't are able to touch the soil. Abandoned in their poverty and ignorance in a "nowhere" in Latin America (but ... with a celular phone!) - without the miracle of the media, without fifteen minutes of fame under the flashes of the Circus, José probably never will have a chance to be free or relieved from his damn mutation .

José, indeed, he has a good chance with the mass midia. Because there's something really mutant on the figure of José of El Salvador. In face, an expression of alienation and a devilish goatee of bones gives the man the appearance of a satyr and a slight tip of joy in the brilliance of his strange and very clear eyes, green or blue, completely unexpected in a central-american young native lost in an end of the World ... The Satyr of El Salvador.